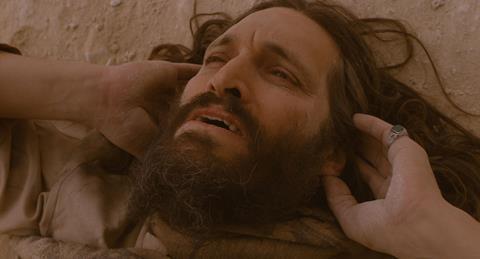 Taken into the Venice competition at the last moment and considered one of its most valuable assets, Jerzy Skolimowski’s new film is a typical festival entry that some will admire, others will detest and everyone will try to label and interpret in his or her own way. While the press book will deliver some of its secrets and tell you where it takes place and when, or what is the name of the characters, the picture is sort of existentially abstract, beyond any kind of narrative discipline. Given Skolimowski’s reputation, festival and art house action should be taken for granted, but the rest will be an uphill battle.

Whatever narrative shortcomings the picture might have, as a parable of these days it is certainly serviceable, though a bit too ambivalent for comfort.

Impressed by reports in the media of black sites installed by the CIA in Europe for the purpose of fighting international terrorism, Skolimowski decided to do his own version of this highly advertised war, paring it down to its bare bones. Forget right and wrong, ideology and scope of the battle, specific identities or even names of places, focus only on basics. On the one side there are many hunters, on the other side a single prey, the ultimate purpose of the game is survival, and to do it, the prey’s only option is to kill before being killed. Back to the laws of the jungle.

Mohammed (Vincent Gallo) - possibly (even that isn’t clear) a terrorist hiding in the Afghan desert - is chased through spectacularly barren, sun-scorched canyons. After killing three of his pursuers he is taken prisoner and sent to a detention center in Europe. On the way, he manages to escape, runs away through a frozen landscape, kills some more people before they can stop him, has his foot caught in a bear trap, is badly wounded by a chainsaw struggling with a lumberjack and a pack of hounds drawn by the smell of blood almost devour him. Finally, almost frozen to death, he reaches a house in the middle of nowhere and is taken in by a mute woman (Emmanuelle Segnier) who cleans and bandages his wounds, and sends him away the next morning, riding on a white horse.

Trying to understand how he could go on running through the frozen forest with one foot mangled by the bear trap, explaining why having his belly split open by a chainsaw does not slow him down or how come the hounds let him go though he is lying hopeless at their mercy, is irrelevant in this instance.

Skolimowski explores the limits of human endurance, attempting at the same time to check how much sympathy he can elicit for an underdog, even if that underdog bears all the signs of the archetypal villain of the day. To complicate matters more, Mohammed, supposedly deaf, is inspired through his marathon flight by memories of Islamic gospels of war and death and retribution in the next world. Significantly, he reaches the house in the woods on Christmas night, and the mute woman, Margaret, fittingly behaves in the best Christian spirit of peace and charity.

Whatever narrative shortcomings the picture might have, as a parable of these days it is certainly serviceable, though a bit too ambivalent for comfort. Visually, however, it is never less than stunning. Adam Sikora’s images are a feast, whether in bright gold and yellow, when shot near the Dead Sea in Israel (standing in for Afghanistan), or in the mostly black-and-white Polish and Norwegian mountain forests.

Vincent Gallo, whose responsibility it is to draw the audience to his side, never manages to turn the trick and suggest that he is no better but no worse than the spectators sitting in the dark and judging him.