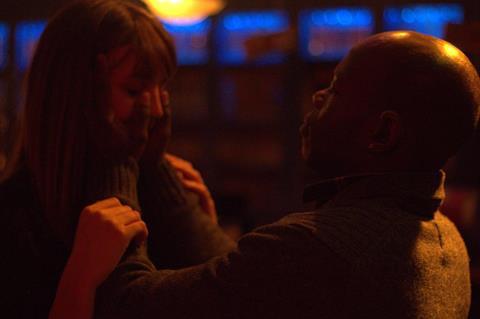 Billed as ” a film by Djinn and Salome”, Faire: L’amour (or FLA) delivers an almost forensic exploration of the flaws and failings in a trio of characters desperately seeking an elusive happiness. Told in a style that echoes past masters of the nouvelle vague from Jacques Rivette to Agnes Varda, it offers a grueling but compelling emotional work-out on a par with a session of John Cassavetes improvisation or an Edward Albee play.

Perhaps it never quite justifies its running time in the way that Blue Is The Warmest Colour did but there is enough raw emotion and filmmaking virtuosity to command your attention and confirm the promise of Carrenard’s award-winning debut feature Donoma (2011).

The marathon running time and sometimes unsympathetic characters will limit the film’s commercial appeal but it should attract healthy Festival interest and support from Francophile audiences and those with a track record of supporting audacious rising talents.

Abandoned after three days of filming in April 2012, FLA resumed shooting in December of that year and bares no obvious signs of its fractured history. Director Djinn Carrenard and “Artistic Director” Salome Blechmans maintain a consistent artistic vision throughout with restless camerawork that drifts in and out of focus, floating and scrutinising like a fighter sizing up an opponent.

Using a camera each, the duo frequently change framing and colour grading within a scene to muddle perspective and throughout there are conversations and confrontations that, for better or worse, have all the ragged edges of improvisation rather than a formal script. When we first meet rapper Oussmane (AZU) in Paris he has signed a contract for his debut album.

He feels confident enough to convince stewardess Laure (Laurette Lalande) that she should not abort the child that is the result of their one night stand. A move to Laure’s family home in Perpignan is the start of a seemingly doomed attempt to build a future together. Against his better judgment, Oussmane is encouraged to visit the sea where he is suddenly afflicted by deafness. Further complications arrive in the shape of Laure’s older sister Kahina (MAHA), a prisoner on a short release to visit her young son.

There are some charming and tender scenes in FLA, but the dominant themes are the feelings of anger, vulnerability and guilt that have come to define and motivate the central characters. There are complex connections and parallels that emerge over the film of the bonds and rivalries between siblings, the impossible hopes invested in the next generation, the irresponsibility of the artist and the sense of betrayal that can destroy a relationship in a heartbeat.

The reliance on improvisation does create some rambling, argumentative stand-offs that begin to grate and there is a sense in which the film starts to tread water after the second hour before redeeming itself with a plaintive sequence in Haiti. Perhaps it never quite justifies its running time in the way that Blue Is The Warmest Colour did but there is enough raw emotion and filmmaking virtuosity to command your attention and confirm the promise of Carrenard’s award-winning debut feature Donoma (2011).