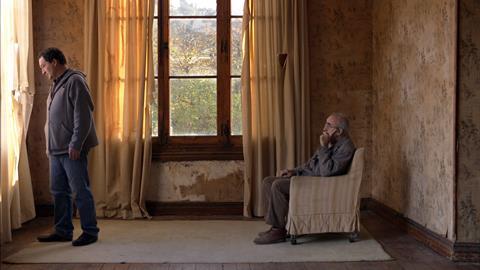 Artfully made and beautifully structured, San Sebastian born director Jose Marie de Orbe’s minimalist film has moments of elegance but is just too introspective and rarified to work outside his home country…or even probably his home region.

Intriguing and beautifully shot at times.

Though there is a screenplay credit, this is more in terms of a working structure of his cast/real-people. Shot over a period of three years, do Orbe’s film is in essence a series if filmed conversations between Luis Pescador, the elderly caretaker of de Orbe’s grand family home which has stood empty for years, and the village priest Mikel Goenaga.

Their understated discussions – and sometimes empty silences – and intercut with shots of the house itself as Pescador wanders around, doing odd bits of DIY here and there, and in one instance sleeping there overnight when he thinks youngsters are going to break in. In a nice sequence we see an owl inside the house rather than burglars.

But in truth while it is intriguing and beautifully shot at times, there is little to hold the attention beyond the fact that this is a well-meaning and very personal film that touches on history, memories (there are sequences of old home movie footage being projected onto walls) and family.