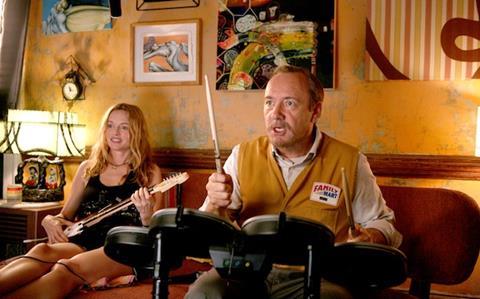 Kevin Spacey gives a typically soulful performance as a former millionaire inventor looking for his shot at redemption, but otherwise Father Of Invention falls far short of being as inventive or confident as its main character. A tame comedy that’s likeable but too slack to be involving, this modestly budgeted affair features a game cast (including Camilla Belle and Heather Graham) that have all been better and more memorable elsewhere.

From Seven to Swimming With Sharks to Horrible Bosses, Spacey has made a career playing supremely confident men who have a bit of edge to them.

Securing a limited domestic release that started October 14, Father Of Invention will quickly move to DVD at the end of the month, a tip-off to the project’s low-key, forgettable nature. Spacey enthusiasts might seek it out, but more than likely this would seem to be one of those disposable curiosities whose existence most people won’t be aware of until the film shows up during the early morning hours on cable.

After amassing a fortune as a fabricator – an inventor who concocts new products by combining two established products – Robert Axle (Spacey) winds up in jail for eight years after one of his inventions maims thousands of consumers. Now penniless, he tries to reconcile with his grown daughter Claire (Belle), who feels betrayed because of his previous focus on his career over his family.

Directed and co-written by Trent Cooper (whose only other feature credit is Larry The Cable Guy: Health Inspector), Father Of Invention goes for mild, sentimental laughs of the sitcom variety as Robert looks for a job while putting back together the pieces of his once-glamorous life. But whether it’s Claire’s generic roommates – including combative lesbian Phoebe (Graham) – or the jerky superstore boss (Johnny Knoxville) who’s unsympathetic to Robert’s plight, the film keeps moving from one predictable, overly broad scenario to another.

From Seven to Swimming With Sharks to Horrible Bosses, Spacey has made a career playing supremely confident men who have a bit of edge to them, so imbuing Robert with a mixture of sadness and swagger is hardly a stretch for him. His ability to show the sweaty desperation underneath Robert’s plans for a comeback gives the character some pathos, although it’s pretty clear early on that he’ll follow a trite trajectory in which he eventually learns the importance of caring about others rather than himself.

As for the rest of the performances, they range from the competent to the gratuitous. Belle is solid as the long-suffering daughter, but Virginia Madsen seems befuddled playing Robert’s rich, flaky ex-wife who has pursued an ill-advised music career. Likewise, Graham strains for laughs as an openly hostile lesbian, a concept that’s meant to be instantly hilarious but never is.