With an online-only edition in early March and a reduced selection due to the pandemic, Berlin has still assembled an intriguing slate of world premieres across its Competition, Encounters, Panorama and Specials sections. 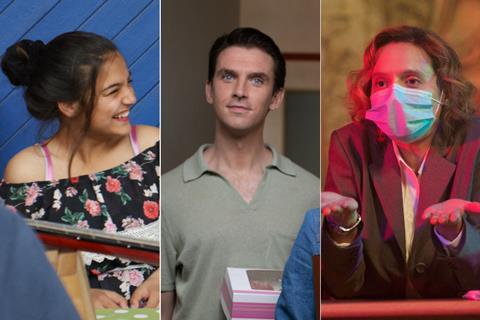 Dir. Radu Jude
Romanian writer/director Jude’s drama (formerly Sleepwalkers) follows young teacher Emi (Katia Pascariu) as she is faced with career and reputational ruin after posting an amateur porn clip online. Jude’s longtime collaborator Ada Solomon produces through her microFilm banner, and the picture shot in Bucharest last August and September incorporating the pandemic into its storyline, with the cast wearing masks throughout on screen. Backers include the Romanian Film Centre, the Luxembourg and Czech film funds and the Croatian Audiovisual Centre. Jude won the best director Silver Bear in 2015 with Aferim!, and also played in Forum in 2009 with his debut feature The Happiest Girl In The World.
Contact: Heretic Outreach

Ballad Of A White Cow (Iran-Fr)

Dirs. Behtash Sanaeeha, Maryam Moghaddam
This is the third collaboration and second joint directing effort for emerging Iranian filmmakers Sana­eeha and Moghaddam. The latter is best known internationally for her acting role in Jafar Panahi’s Closed Curtain, and also stars in this film as a struggling single mother with a deaf daughter who, on learning that her husband was executed a year earlier for a crime he did not commit, battles for a public apology from the magistrates. Gholamreza Moosavi and Etienne de Ricaud produce. Iranian films have a strong track record at Berlin, with Golden Bears in the last decade for A Separation (2011), Taxi (2015) and There Is No Evil (2020).
Contact: Totem Films

Dir. Alonso Ruizpalacios
Mexican filmmaker Ruizpalacios returns to the Berlinale after sharing the best screenplay award for Competition entry Museum in 2018 and winning best first feature for Panorama selection Gueros in 2014. His latest centres on two rookie cops in Mexico City whose idealism is crushed by a dysfunctional system. Mixing fiction with documentary, it is produced by Mexico’s No Ficcion, with support from the Sundance Institute, among others. World rights have been acquired by Netflix.
Contact: Netflix

Dir. Xavier Beauvois
After Cannes and Venice premieres for films such as Of Gods And Men and The Price Of Fame, Beauvois makes his Berlinale debut with his eighth feature. Jérémie Renier plays a police commander whose life unravels after he kills a man while trying to stop him from taking his own life. Beauvois shot the drama in his adopted home region of Pays de Caux in Normandy in early 2020, just prior to France’s first Covid-19 shutdown. The cast also features his wife and daughter, Marie-Julie Maille and Madeleine Beauvois respectively, as well as a host of non-professionals from the region.
Contact: Pathé International

Fabian — Going To The Dogs (Ger)

Dir. Dominik Graf
Veteran director Graf’s first feature in five years is adapted from a 1931 satirical tome by Erich Kästner, best known for his 1929 children’s novel Emil And The Detectives. Set in Berlin during the Weimar Republic, the film stars Tom Schilling as the titular Fabian, who works in a cigarette factory by day and drifts through brothels, bars and artist studios at night with his wealthy friend Labude (Albrecht Schuch). During these nighttime adventures, he falls in love with an actress (Saskia Rosendahl). Graf last played in Competition in 2014 with Beloved Sisters. His latest is produced by Felix von Boehm of Berlin-based Lupa Film, in co-production with DCM Pictures and ZDF, with German Federal Film Fund (DFFF) backing.
Contact: Alice Lesort, Les Films du Losange 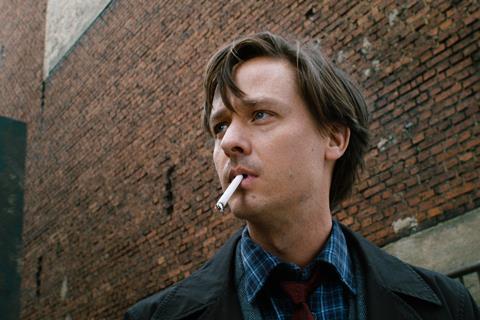 Forest — I See You Everywhere (Hun)

Dir. Bence Fliegauf
Hungarian writer/director Fliegauf won best first film at the Berlinale with Forest in 2003. Nearly 20 years later, he returns with an experimental ensemble drama that is not a direct sequel but again offers a visceral portrait of Hungarian society. Since Forest, Fliegauf has returned to the festival with Dealer in 2004 and Just The Wind in 2012, which won the jury grand prize. His latest feature is produced by Budapest-based Fraktal Film and Inforg-M&M Film.
Contact: Films Boutique

Dir. Maria Schrader
Maren Eggert, Sandra Hüller and Dan Stevens star in this comic romance about a scientist who takes part in an unusual study in which she lives with a humanoid robot programmed to fulfil her needs. Based on a short story by Emma Braslavsky, it is a third solo feature for actress/filmmaker Schrader, who won a Primetime Emmy last year for her work directing Netflix miniseries Unorthodox. Shot in Berlin and Denmark and produced by Lisa Blumberg for Letterbox Filmproduktion, I’m Your Man was originally conceived as a TV movie for German channel SWR before Berlin came calling. Schrader’s previous feature, Stefan Zweig: Farewell To Europe, won the people’s choice award at the 2017 European Film Awards.
Contact: Beta Cinema

Dir. Hong Sangsoo
Korean filmmaker Hong is back in Berlinale Competition — for the fifth time. He won the Silver Bear for best director with The Woman Who Ran in 2020 while On The Beach At Night Alone won the Silver Bear for best actress Kim Minhee in 2017. Told in three parts, Introduction shows a young man visiting his father, lover and mother. The cast features Shin Seokho, Park Miso, Kim Youngho, Ye Jiwon, Ki Joobong, Seo Younghwa, Kim Minhee and Cho Yunhee. The film was produced by Jeonwonsa Film Co Production.
Contact: Finecut

Dirs. Joana Hadjithomas, Khalil Joreige
Directing and artistic duo Hadji­thomas and Joreige draw on their experience growing up against the backdrop of the Lebanese civil wars for this long-gestating feature. Exploring the intersection between private lives and history, it revolves around a single mother and her teenage daughter who are confronted with the former’s colourful but painful Beirut past when a box of old notebooks, tapes and photographs arrives on Christmas eve. The duo’s credits include 2012 documentary The Lebanese Rocket Society and Catherine Deneuve road movie I Want To See (2008). The film is lead produced by Beirut-based Abbout Productions.
Contact: Playtime

Mr Bachmann And His Class (Ger)

Dir. Maria Speth
Filmed and edited over the course of a decade, this sensitive documentary explores the close bond between elementary teacher Dieter Bachmann and his students, as the former’s unconventional methods clash with the norms in their provincial German industrial town. German filmmaker Speth has established herself in both documentary and fiction filmmaking, winning Rotterdam’s Tiger Award with her 2001 debut feature The Days Between. Subsequent dramas Madonnas and Daughters premiered at the Berlinale in 2007 and 2014 respectively. Speth’s latest is produced through her own Madonnen Film banner.
Contact: Films Boutique 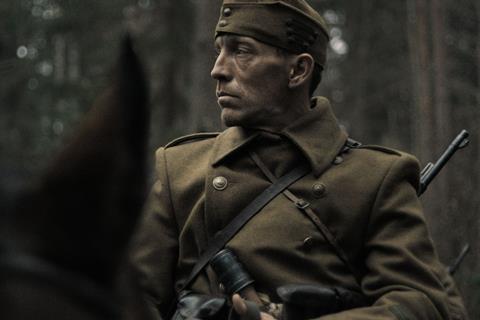 Dir. Dénes Nagy
Nagy’s feature debut centres on a Hungarian army officer who is part of a special scouting unit searching for Russian partisans in Nazi-occupied Soviet Union. When his commander is killed, he is forced to take charge. Nagy adapted the script from a novel by Pal Zavada, and the project participated in the TorinoFilmLab in 2016 and 2017 and CineLink co-production market in 2018. Most of the cast also make their feature debuts, including Ferenc Szabo as the officer. Producers are Marcell Gero and Sara Laszlo of Budapest-based Campfilm, with support from the National Film Institute Hungary, Eurimages, CNC, the National Film Centre of Latvia, Creative Europe MEDIA and German public broadcaster ZDF/Arte.
Contact: Luxbox

Dir. Daniel Brühl
Brühl makes his directing debut — and also stars alongside Peter Kurth and Vicky Krieps — with this black comedy centred on a film star and his troublesome neighbour. Based on an original idea by the Spanish-German actor and exploring issues of gentrification and inequality in Berlin, the script was written by Daniel Kehlmann, with whom Brühl collaborated on a 2015 adaptation of the writer’s novel Me And Kaminski. Brühl also produces with his Amusement Park Film partner Malte Grunert (Land Of Mine), with backing from the DFFF, Medienboard Berlin-Brandenburg, Creative Europe MEDIA and Warner Bros Germany, which will release in German-speaking territories.
Contact: Beta Cinema

Dir. Céline Sciamma
After period drama Portrait Of A Lady On Fire, Sciamma returns to the contemporary world of children and adolescents that has characterised her previous work. Little has been revealed about the storyline apart from the fact it involves two eight-year-old children. The film was conceived during France’s first Covid-19 lockdown in early 2020 and shot late last year. It reunites Sciamma with producer Bénédicte Couvreur at Lilies Films and cinematographer Claire Mathon, who won awards for Portrait Of A Lady On Fire. Sciamma was last at Berlin with Tomboy, which played in Panorama in 2011 and won the Teddy jury award.
Contact: mk2 films

What Do We See When We Look At The Sky? (Ger-Geo)

Dir. Alexandre Koberidze
Georgia’s Koberidze follows up his acclaimed 2017 debut Let The Summer Never Come Again with a romantic tragicomedy with magical elements. It centres on a young man and woman who meet on the street and fall instantly in love. They agree to meet the following day but are unwittingly cursed and wake up with completely changed appearances. It marks Koberidze’s graduation film from the prestigious German Film and Television Academy (DFFB) and is co-produced by Germany’s New Matter Films and Georgia’s Sakdoc Film.
Contact: Cercamon

Wheel Of Fortune And Fantasy (Jap)

Dir. Ryusuke Hamaguchi
With a common theme of coincidence and imagination, this latest film by Asako I & II director Hamaguchi comprises three episodes, including an unexpected love triangle, a failed seduction trap and an encounter that results from misunderstanding. Hamaguchi has recently emerged as a prominent filmmaker from Japan. His 317-minute Happy Hour won festival awards, including special mention for his script and an award shared by his four actresses at Locarno in 2015, while Asako I & II debuted in Competition at Cannes in 2018. He was also a co-writer on Kiyoshi Kurosawa’s Wife Of A Spy, winner of the Venice Silver Lion last year.
Contact: M-Appeal