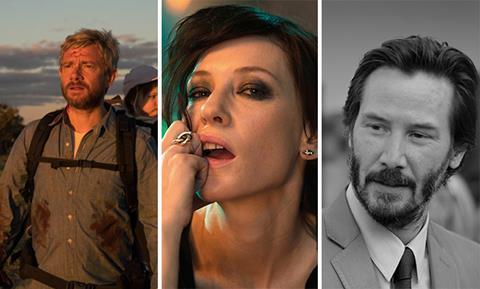 Scroll down for a selection of the biggest deals

Business simmered at the EFM as buyers perused the market with one eye on Cannes and only a handful of marquee titles triggered sales.

Besides MGM’s splashy pre-market acquisition of worldwide rights to Fighting With My Family, a reported studio deal with Sony for Tom Hanks’ Greyhound, and plenty of interest in Liam Neeson’s action film Hard Powder and thriller-romance Serenity, sellers reported steady trade on a variety of films.

But the growing presence of Netflix and Amazon Studios – both of whom were on the ground – continues to shake up the industry. After both went on big spending sprees at Sundance, Netflix swooped on worldwide rights to the Martin Freeman zombie thriller Cargo.

For smaller international distributors without the wherewithal to invest in films, board projects at script stage, or compete with the digital giants and the studios on worldwide buys of must-have titles, there are slim pickings and these are challenging times.

Patrick Wachsberger, the Lionsgate International chief and chairman of Lionsgate Motion Picture Group, said: “Most of the big distributors have their slates covered for 2017 and probably part of 2018, so there’s no rush because you’re thinking about Cannes”.

“It’s less volume,” Covert Media president of international Liz Kim Schwan said of the EFM. “We’ve had a solid market and in this landscape that’s a cause for celebration.”

MGM in lavish worldwide deal for ‘Fighting With My Family’
In one of the biggest EFM deals ever, the studio has paid what Screen understands to be in the mid-teens for the upcoming comedy drama.
Full story HERE

‘I Am Not Your Negro’ sells to more than 40 territories (exclusive)
Wide Management has closed a series of deals on the feature doc.
Full story HERE

IFC buys Armando Iannucci’s ‘The Death Of Stalin’
The seven-figure North American deal came together quickly in Berlin on Saturday and reunites the distributor and director of In The Loop.
Full story HERE

Deals have closed in multiple territories including Italy and Australia.
Full story HERE

Joachim Trier’s ‘Thelma’ racks up first sales for Memento (exclusive)
Film shot in Oslo in September is due to be delivered this spring.
Full story HERE