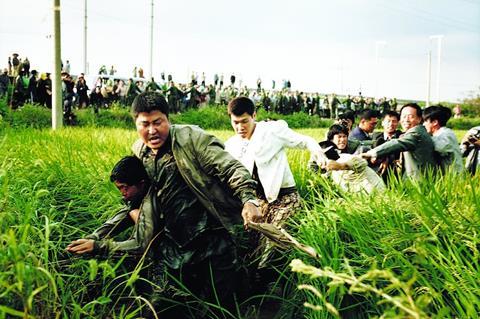 Memories Of Murder is one of the most complete and compelling films to have come out of South Korea in recent years. Set up as a detective thriller, the film is by turn mysterious, dramatic, creepy and corroding - and it comes loaded with a chilling twist at the end. Its story, based on real events from the 1980s and 1990s, examines the inefficiencies of a rural police force in getting to grips with a perversely motivated and calmly efficient killer in their midst. But its real target is character development and an assemblage of clues that seem first to lead in one direction and can then be read in another.

The even-handed direction allows hints of motivation, while also provoking outrage that the killer has not been caught.

Handled by CJ Entertainment, Memories did deservedly huge business on release this Spring in Korea, amassing a total of just over 5 million admissions and taking more than $25m after five weeks, making it the biggest homegrown or foreign film in South Korea this year. Its international prospects seem strongest within Asia, where the original story may remain part of folk memory and where Korean films are now increasingly second only to Hollywood fare. Regrettably, its prospects further afield are limited by the usual factors preventing the breakout of Korean commercial pictures; these are the handicaps of being foreign-language, but without the cachet of an art-house label, a name director or name stars. Neither does it belong to one of the sub-genres - action, fantasy or horror - which have Western and niche video following.

Director Bong Joon-Ho, who has a perfectly good track record including directing Barking Dogs Never Bite and scripting Phantom: The Submarine, is understood to have read extensively on Jack The Ripper, including the From Hell graphic novel before tackling Memories with screenwriters Kim Kwang-Rim and Shim Seong-Bo. The result is the retelling of a well-known series of sex murders - a great rarity in Korea - with grit, atmosphere and dramatic panache.

The film’s first murder sets the pattern. It is matter-of-fact, banal and deeply shocking to the rural community. A woman’s body is found distinctively trussed and sexually abused in a culvert by a pleasant field. The country police are bunglers who trample over evidence and let the press in on pretty much everything.

They are under governmental pressure to capture the culprit quickly and resort to tactics that range from framing the village idiot to consulting a shaman and using a policewoman as bait. Slowly they discern a pattern connected to the weather and music played on the radio, but they are consistently several steps behind their man.

Bong develops an atmosphere which allows him to approach the murders from several sides. Sometimes the police are simply greeted with a cold corpse, other times the camera sits premeditatedly in the trees waiting for a rainy night attack. On-screen violence is largely absent and the suspense is at its strongest when the film follows the police up a number of blind alleys and false trails.

The even-handed direction allows hints of motivation, while also provoking outrage that the killer has not been caught. And, while Bong creates sympathy for the victims, viewers can still side with the police, whose actions are all too human.

Indeed the contrasting character progressions of the two main detectives - and the actors’ performances - are Memories’ greatest asset. The country detective, a character invested by the balloon-faced Song Kang-Ho (a veteran of Shiri, JSA, Foul King and Sympathy For Mr Vengeance), is lazy and bungling , but grows in integrity and resourcefulness. The detective drafted in from Seoul, played by Kim Sang-gyeong, the lead from Hong Sang-Soo’s Turning Gate, comes in blowing hot. But his layers are peeled away and as the attacks continue he is shown to be every bit as desperate and dangerous as his country cousin.