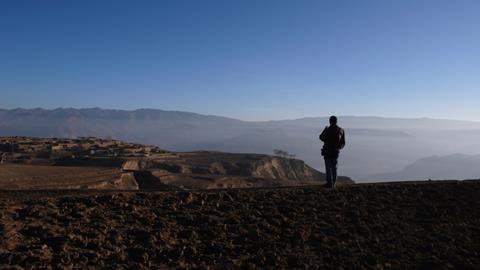 On paper, The Search holds out much promise. A film director, accompanied by his assistant, a cameraman and a friend who serves as a sort of guide, drive through the Tibetan mountains looking for actors to cast in the director’s next project - a version of Drime Kunden, a famous Tibetan opera about an Indian prince whose life is devoted to others to the point of giving away his children and even his eyes to people in need.

The actors rarely speak to camera and a large part of the dialogue is delivered off-screen as the car goes through the mountains.

With this multi-layered narrative, The Search, theoretically, should work and it’s easy to see why it has found a berth at prominent festivals such as Shanghai and Locarno. But Tseden is at such pains to hold the viewer at arms length emotionally and even intellectually, it’s hard to envisage a general audience – outside the confines of specialist or late-night arts TV – going the distance here.

The director discovers the Prince’s wife in the first village but she refuses to accept the part unless her ex-boyfriend plays the lead. The director agrees to find him, and they go on the road, testing further candidates en route, with the director’s friend recounting in detail his own his own thwarted love story which moves the stubbornly-veiled girl deeply.

Thus Tseden presents a film within a film: two separate love stories in an operatic piece with philosophical and poetical attributes which also manages to be a travelogue through some of the most spectacular landscapes in the world across the Tibetan plateau. But the film is composed almost entirely in long shot, and even when it edges in closer to its protagonists, the back lighting hardly allows the audience to identify a face, let alone judge an expression.

According to Tseden, this is a tribute to Tibetan esthetics, as their art favours panoramic views. But to Western audiences, it runs the risk of being alienating. Instead of drawing an audience into the story, it encourages viewers to remain aloof and indifferent. The use of non-professional actors is a natural choice in this case, but with the camera at such a remove, it’s hard to appreciate their contribution: they rarely speak to camera and a large part of the dialogue is delivered off-screen as Tseden follows the car through the mountains.

The slow pace could perhaps be justified by the spectacular scenery and sites presented on screen, but Tseden is disturbingly silent as to their political context.  He argues that the choice of the film’s subject - the preservation of a traditional Tibetan cultural gem – is subversive enough for what is officially a Chinese production.