Renée Zellweger talks preparing for 'Judy', why a career break gave her a "new perspective"

Taking on the role of one of the most beloved film and music icons of all time was no small ask. Renée Zellweger explains to Screen why she felt ready for the challenge of Judy. 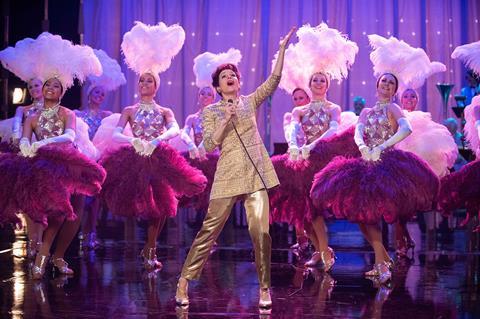 Renée Zellweger has dived down rabbit holes to portray Judy Garland. She put herself through the proverbial wringer, contorting her body and stretching vocal chords in ways they had never been contorted and stretched before.

Which is exactly how the Texas-born actor/producer wanted it. While pleased with her accomplishments and grateful for the opportunities that came her way, Zellweger became bored of her performances after working flat-out for more than 15 years. She entered a self-imposed exile in 2009 and when she re-emerged about seven years later, she was hungry to do meaningful work.

And then she got a call from Judy producer (and former Working Title executive) David Livingstone, an old associate from the Bridget Jones franchise. He had a script about the final chapter of Garland’s life, when the destitute star juggled domestic problems with a residency at The Talk Of The Town theatre in London.

“It’s not anything I’d ever considered possible,” says Zellweger of the role. Yet she was drawn to the story of a cultural icon in her final days, and flew to London in 2017 for make-up tests and initial recordings at Abbey Road Studios “to see what might be possible and if it made sense”. Not entirely discouraged, she returned home and started researching.

“It is your responsibility to go down the YouTube rabbit hole and read every book you can find and look at all the photographs and start collecting things and stories and ideas,” says Zellweger. “That’s a joy.”

The technical side of things was perhaps a little less joyful. Zellweger had earned an Oscar nod for playing Roxie Hart in Chicago and could sing, but this was different. “I thought I had a very thin and inconsistent voice and had to learn how to sing differently because Judy had massive resonance and she belted out songs that were not within my ability when we started talking about this.”

Working with director Rupert Goold, a veteran from the UK theatre world, Zellweger immersed herself in preparation. One year before rehearsals she engaged a vocal coach in the US and then practised for four months with the film’s musical director Matt Dunkley. Production started in London in March 2018.

Zellweger sang live, and impressed Goold with her attention to detail, mastering tics and holding her shoulders in the way Garland did due to a curvature of the spine. “You feel a different sense of responsibility when you’re playing someone who has lived and who is known because there are certain parameters that are established and non-negotiable,” she says.

“With someone who is as beloved as Judy, you just want to be responsible in your approach. I love her too and I love what she represents and I love this gorgeous catalogue of work she left and that everybody feels some sort of attachment to her if you’ve ever seen The Wizard Of Oz. I wanted to be careful with that and we were all motivated by the hope to spotlight her importance and celebrate her legacy and feel we did it right.”

Garland’s daughter Liza Minnelli was reportedly not thrilled about the idea of the film, and while Zell­weger claims not to know much about that, she is empathetic. “I’m sure it’s probably an emotionally complicated thing to experience people talking about your mum in a project that you were not fostering personally.”

Judy premiered in Telluride and the critical response to her performance was strong. At press time it had earned $35.4m at the global box office — comprising $23.5m through Roadside Attractions and LD Entertainment in the US and $9.9m through 20th Century Fox, distributor of Pathé’s films in the UK — and returned Zellweger to the limelight after star turns in the Bridget Jones franchise, Chicago, her Oscar win for best supporting actress in Cold Mountain, and many others.

Zellweger is enjoying her return, all the more so because her leave of absence enabled her to “step back for a minute and reprioritise”. She continues: “I hadn’t lived away from a movie set and I needed to have some authentic experiences with people. How can you be a storyteller when you can’t relate to people because nobody has let you carry your own suitcases in 20 years? How are you a storyteller when people don’t meet you, they meet your persona?

“That’s not to say [being a movie star] is not great… Spoiled-rotten life, dreams coming true. But it doesn’t allow you to sit still and say, ‘What’s the purpose of my life here and what am I contributing? How can I grow?’”

She took stock and launched a production company, The Big Picture Co, which struck a first-look deal earlier this year with MGM TV. “I didn’t realise there was that chaos and how unhealthy I was,” she says. “Now I can see that I can enter back into this work with new perspective and a new set of boundaries and probably do a better job.”

When she first thought about taking a break, Zellweger recalls “warning whispers saying what a terrible thing that is for an actress to do at that age. But it couldn’t keep going; it wasn’t even an option — I couldn’t sustain.” If that reflected a ruinous attitude towards women of a certain age, she is encouraged by the #MeToo movement.

“It’s redundant to say it’s a great thing,” she says. “It’s bending towards the light and sometimes it takes a minute. Young women are coming into their own. They have examples of women in power and influence and it wouldn’t occur to them not to try to be a CEO or question why there isn’t gender parity — they’ve always lived in a world where there’s Angela Merkel or Hillary Clinton. It must be strange for them to look at what was not challenged for so many years.”

So what’s next for Zellweger? “A few irons in the fire.” Will there be another Bridget Jones film? “I don’t know. I’m not being coy. That’s a Helen Fielding question,” she declares archly. “I sure wouldn’t mind that — it would be fun.”