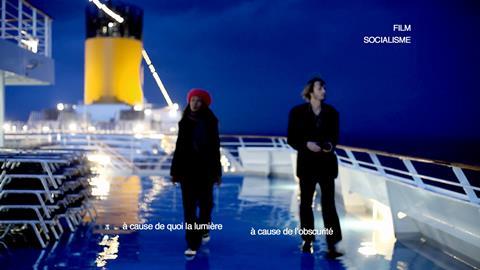 Film socialism in action: the fact that Jean-Luc Godard’s latest oeuvre is credited to a nine-person ‘filmmaking committee’ headed by the director himself. Film socialism not in action: Cannes’ continued deference to a brand-name auteur even when his angry, youthful deconstruction of the filmic medium has descended into hermetic style games.

Commercial prospects - a phrase that Godard himself would chuckle over - are of course confined to the most hardcore cineastes.

Perhaps Jean-Luc Godard’s least narrative production, this occasionally amusing, rarely thought-provoking and ultimately wearing reflection on civilization, language, democracy and llamas seems stuck in a 1960s timewarp, unable to renew the language of a filmmaker who has lost his urgency when compared to many of today’s video artists.

None of this probably matters to Godard, but whereas in, say, Histoire du Cinema, Godard struck sparks and insights out of his engagement with the history of the cinematic medium, here he seems to be treading water, or rather splashing about in a post-structuralist swamp.

Commercial prospects - a phrase that Godard himself would chuckle over - are of course confined to the most hardcore cineastes, especially those who grew up with the director’s films in the 1960s and ’70s.

Viewers whose French is less than fluent will be alienated even further, as the on-print English subtitles are deliberately elliptical, picking out random words from the mostly French dialogue. For example, a line which translates as “Money was invented so we don’t need to look God in the eye” is subtitled ‘money invented’.

Described as ‘a symphony in three movements’, the film opens aboard a huge Costa cruise liner which will stop off at six prominent locations, and themes: Egypt, Greece (here referred to as Hellas, or rather, in a typical Godardian pun, ‘Hell As’), Barcelona, Naples, Odessa and Palestine. Characters deliver gnomic lines, some of them taken from the roster of works that Godard uses as his inspiration and touchstone (these range from films such as Le Quattro Giorni di Napoli or Battleship Potemkin to the literary works of Balzac, Walter Benjamin, Gide, Shakespeare, Uncle Tom Cobley, and all).

Patti Smith, makes two very brief musical appearances as a passenger, while footage of the real passengers - some of it in crackly lo-fi video - is inserted between the scenes; there are also chapter headings with names like ‘Comme Ca’ or ‘Abbi Ne Viderem’ (the title of a work by composer Giya Kancheli, whose dark contemporary classical music is part of the film’s rich soundscape).

A second part set in a petrol station somewhere in France has its moments of droll humour - many associated with a blond-haired kid who has great comic timing. This part seems to be about democracy. In the final and most engaging section, stories and/or myths associated with Godard’s six European locations are examined.