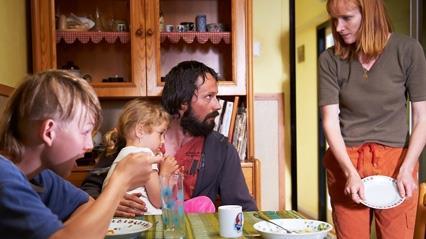 The men in Four Suns never grew up, and their children are coming of age with the example of their parents. Sounds like fun, if it’s not your family.

Four Suns never loses sight of the moral side of its characters.

The ensemble comedy by Bohan Slama is set among ordinary Czech characters – its dramatic quirkiness calls to mind a Mike Leigh production. The film plays with dark comic threads, but has a strong moral center about the importance of raising children responsibly. A positive response from critics at festivals will be the key to getting Four Suns beyond the Czech Republic.

Jara, around whom the action (and the pot smoke) spins, is a bearded pothead, who is walking evidence that marijuana can be a highly addictive drug. He gets caught getting stoned at his job – with high wages at an ultra-modern factory – and he’s fired. Stepson Vena from an earlier marriage is starting to spend time with the wrong kids in a dingy park. Jara knows he could be facing a teen crisis. The problem is that he behaves like a teenager.

There are other minor crises. Jara is distracted from getting a new job by Karel, a self-styled scraggle-haired guru who carries rocks around as talismans and lectures well-meaning would-be followers. Jara’s wife, Jana, (Ana Geislerova), takes out her frustrations by looking around for a sexual partner. The man she finds is known to everyone in her household.

Most of Four Suns is shot in close quarters, from Jara’s cramped apartment to the smoky bars where he often ends up. Jaroslav Piesl plays Jara the loser, not as a cipher, but as weak man who knows the damage that he’s doing to his family.

In Bohan Slama’s script, family is another term that’s hard to define. Troublesome Vena is a stepson who despises his biological mother for leaving him, and resents Jana, his stepmother, for betraying his father.

Cinematographer Divis Marek follows the frayed bonds that are challenged by booze, drugs, sexual lust, and the allure of a religious cult.  Pot smoke becomes an irresistible shroud that wraps Jara’s head and steals his powers of judgment. When Vena and his friends experiment with whatever they can get their hands on, the handheld camera latches on to the recklessness of youth, lurching around the uncontrollable kids.

In racing through scenes of intoxication and get-rich-quick schemes, Four Suns never loses sight of the moral side of its characters. Jara and his generation aren’t bringing up children with skills to confront the world. The willingness of credulous folk to follow a “holy man” caring a rock in his hand would be scarier, if it weren’t so silly.

Four Suns is much more than a Czech stoner film, which will make it a challenge to find an audience.