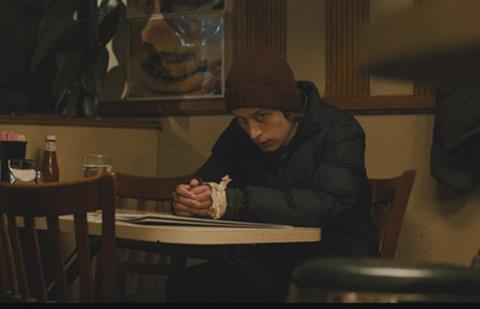 Rory Culkin is mesmeric in writer/director Lou Howe’s striking film about a mentally disturbed young man, and while the film may tread familiar downbeat territory at times it is hard to forget Culkin’s impressive lead performance.

The film is very much dominated by Culkin, and while the character of Gabriel can equally overpower at times, the actor’s sheer charisma carries the film.

The film, which premiered at the Tribeca Film Festival, is – by it very nature – a tough watch, but the gradual revelations of the character’s issues keep it intriguing and challenging, and while the support characters often simply can’t compete with the complexities of Culkin’s well-developed and defiantly uneasy character the film remains a powerful project. Hardly an easy sell commercially, it could well feature heavily on the festival circuit given Culkin’s strong performance.

Gabriel (Culkin) is released from an asylum where he been under care for the past year years on the understanding that this is his last chance to prove he can function in the outside world. He has to keep on taking his medications and stay with family, but Gabriel has other plans as well.

He wants to track down and marry Alice, with whom he had a childhood romance but hasn’t seen for years, and while his family are determined to keep him at home he aims to head off on his mission to find her. His impatient journey through New York veers between amusing and vaguely worrying, and gets marginally more strange as his condition causes him to get more and more stressed as he searches for Alice.

This odd quest gives the film a sense of suspense and it doesn’t disappoint when he eventually meets the grown-up Alice (Emily Meade), though in truth the film is really about the journey – interspersed with his troubled relationship with his family, including serious older brother Matt (David Call), and his fussing mother Meredith (Deirdre O’Connell – as Gabriel tries to find his own form of therapy in his search.

The film is very much dominated by Culkin, and while the character of Gabriel can equally overpower at times, the actor’s sheer charisma carries the film.