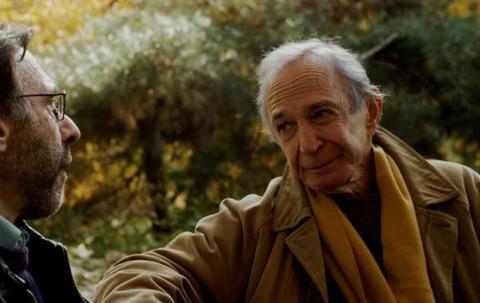 A light, pleasant stroll through New York, from the Lower East Side to Central Park, in the company of an American icon of the stage and the movies, who could ask for anything more? That is exactly what Joseph Rezwin provides in this memorial to the late Ben Gazzara, who died earlier this year, a documentary that will no doubt travel to plenty of festivals and an easy fit for television programming.

Gazzara concedes early in the film that from early childhood he never wanted to be “anything but myself”.

Age and his bout with cancer may have left their traces on him and the voice may be cracked and lacking its past sonority, but the lively twinkle in his subject’s eyes is still there, his personal charm is as infectious as it ever was and there are always bits and pieces of a rich past to easily fill up this film, which premiered at the Locarno Film Festival.

But better forget any expectation of a serious discussion on Ben Gazzara, the actor, whose formidable potential was believed at the time to be the equal, if not greater, than any of his colleagues at the Actors’ Studio; any revelations of rarely seen clips from his stage performances (which he specifically mentions in the film as his best work); visual reminders of his rich TV career (that he is less fond of), or even a detailed review of his long film career (clips from Anatomy Of A Murder or a couple of Cassavetes’ films are not sufficient). Scholars looking in future for such information will have to seek it elsewhere.

Rezwin, who first met Gazzara 34 years ago on the set of Cassavetes’ Opening Night and kept loosely in touch with him since, was evidently looking for Gazzara, the man behind the actor’s mask, and therefore went out with him from the lower tip of Manhattan, where he was born, and on from one milestone to another through the city, soliciting Gazzara’s personal memories rather than the secrets of his profession.

Seeing the actor walking through the streets of the city he loved most and always considered home, delighted that passers-by still remember him, you feel just like joining Reswin’s team and maybe sneak in a question or two, but not about his work, on which he never goes into great details, but rather his personal life. The Actors’ Studio is only seen from outside and all the celebrated names that were brought up, be it James Stewart, James Dean or Marlon Brando, get the kind of typical deferential treatment you’d expect to be given at a press junket.

The testimonies in the film, by people like Frank Ghery, Julian Schnabel or Al Ruban, who knew him intimately, all refer to Gazzara the person rather than the actor and Gazzara himself, when reminiscing about the family he had in his pals John Cassavetes and Peter Falk, once again talks about their intimacy rather than their work.

Some pieces of wisdom do slip through, however, whether it is his remark that if you’re not an interesting individual in your private life, there is very little chance of your becoming an interesting actor, and the end titles soliloquy about the importance of style in whatever you do.

Gazzara concedes early in the film that from early childhood he never wanted to be “anything but myself”. Later on, Reswin remembers he was terrified when he stepped on the set of Opening Night, because he could never tell when these people were acting and when they were being themselves. This may explain why Reswin was looking for the person to find the actor, because there is no real way to separate between the two.