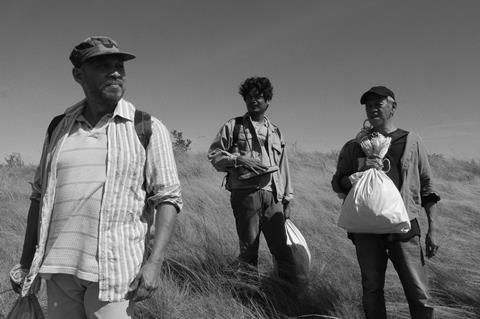 Filipino director Lav Diaz is notorious for being possibly the last director on earth who regularly makes films that last as long as he feels they need to – eight, nine, even 11 hours in one case. This is a distinction he has been able to achieve in part because he works on minuscule budgets, often more or less as a one-man band. That is the case again with Genus Pan, which he wrote, directed, produced, shot and edited, but which clocks in at the length of a ‘normal’ feature (albeit at the generous end of the scale). Concise though it is at 157 minutes, Genus Pan is by no means minor Diaz and, before screening in Hamburg, was a standout of the Orizzonti section in Venice, where his 2016 The Woman Who Left won the Golden Lion.

Following his last two, somewhat uneven films – folk musical Season Of The Devil and dystopian sci-fi experiment The Halt – this unusually accessible Diaz offering should follow 2013’s Norte, The End Of History in overcoming programmers’ and distributors’ qualms, making a connection with a discerning niche audience.

Still conforming to Diaz’s wayward narrative approach Genus Pan – an expansion of Diaz’s contribution to 2018 portmanteau film Lakbayan - nevertheless shows his unmistakeable style and preoccupations, but pared to their essentials, resulting in a tone of trenchant clarity. One of Diaz’s more overtly religious-themed dramas, the story is, for much of its first two hours, pitched somewhere between chamber drama and road movie, as tensions play out between three men crossing a jungle. They are miners: youngish Andres (DMS Boongaling); and two older men, serious, religious-minded Paulo (Bart Guingona); and foreman Baldo (Nanding Josef), who has shamelessly been taking a cut of his crew’s wages.

The three men sail home to the island of Hugaw – a place supposedly riddled with evil, and haunted by ominous mythical presences. Once they land and start crossing thick jungle towards their village, Baldo can’t help throwing his weight around, while calm, grounded Paulo tries to keep the headstrong Andres from giving vent to his rebellious tendencies.

With the young man seething with resentment at what the island’s ruling powers have done to his family, things gradually simmer to a boil. The way that Diaz carries off his first big moment of dramatic release is quite brilliant and troubling. Just as he introduces a whole new set of characters, a flashback gives us a shocking revelation about an episode in the older men’s past, followed by abrupt violence in the present – an incident replayed much later, with a whole different inflection. Meanwhile, that revelation provides the narrative hinge of the film, as Andres faces the machinations of his sneering nemesis Inggo (Joel Saracho) and comes to a reckoning with Paulo’s daughter Mariposa (Diaz regular Hazel Orencio, also doing duty as AD and production manager).

While Diaz films often provocatively mix realism, myth and fabulism, Genus Pan largely holds back from the outright bizarre, with a few exceptions. Notably, there is the early irruption in voiceover of a TV or radio discussion in which an expert comments on the human race as part of the ‘Pan’ genus, still characterised by the primal instincts of chimps et al, which only a few rare exalted souls (Jesus, Buddha, Mother Teresa) transcend. There is also a reference to a supernatural black horse that haunts the island – and when it actually appears, it’s just a black horse, and yet means so much more. Then there’s an extraordinary, initially mystifying encounter with a whooping off-screen creature (bird? monkey?) that sets up Paulo and Baldo’s delirious back story as abused circus recruits.

Diaz’s visual style is always consistent, whether he’s behind the camera or working with a DP, and here his own black-and-white photography has the usual high-contrast crispness, with the theme of humanity’s relation to nature sharply encapsulated in the way that the actors tend to merge into the density of the foliage they move against. The crowing of roosters, cawing of birds, buzzing of insects run like a commentary throughout the action, right up to a closing shot that leaves you feeling, as ever in a Diaz film, that you’ve been on a long, strange journey – and a journey that’s at once similar to and entirely different from any Diaz itinerary you may yet have experienced.