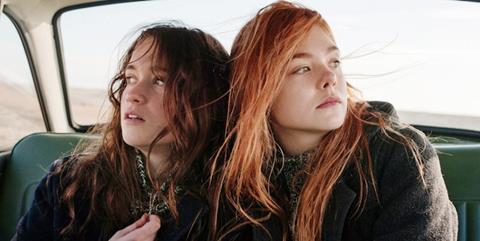 Ginger And Rosa is Sally Potter’s most approachable film in a very long while. It offers a fond, freewheeling remembrance of an intense female friendship challenged by the threat of nuclear annihilation and the giddy promise of liberation at the dawn of the Swinging Sixties.

Elle Fanning makes an appealing Ginger, raw with emotion, easily hurt and filled with all the vulnerability of an adolescent making her transition into an adult.

Winning performances and a stylish evocation of the period carry the film through a beguiling first hour before it runs out of steam. The more banal plot elements and overwrought emotions that dominate in the later stages significantly dilute its impact. The film should still find a ready welcome among nostalgic older viewers and those drawn to classy British coming of age dramas.

Potter opens the film with scenes from the nuclear devastation of Hiroshima in 1945. It is the year in which Ginger and Rosa are born and by the time of the Cuban Missile Crisis in 1962 they have never known a world without the possibility of extinction. Ginger (Elle Fanning) wants to be a poet and is drawn to activism and the CND (Campaign For Nuclear Disarmament), while Rosa (Alice Englert) seems more interested in boys than bombs.

They are still inseparable and the film captures that rush of exhilaration as they experience a growing sense of their sexuality and a world that is theirs for the taking. There are echoes of the nouvelle vague in a swirl of images that capture snapshots of days at the beach, huddled in coffee bars and smooching conquests in back alleys that might have been lit for a Wong Kar-Wai film.

Cinematographer Robbie Ryan favours intense close-ups and handheld swoops to convey these free spirits and the possibilities that stretch in front of them. As Ginger grows increasingly disturbed by events on the global stage, there are equally alarming developments on the home front as her father Roland (Alessandro Nivola) leaves her mother Natalie (Christina Hendricks) and pursues his attraction to Rosa.

The film seems particularly acute in recognising the changes heralded by the Sixties as the certainties of church and marriage crumbled and the authority of parents became something to be challenged. Ginger has moments of despising her mother for being a mere homemaker and idolising a father who has had the luxury of being irresponsible. Discovering his feet of clay plants a seed that might encourage Ginger to see the world differently.

A strong cast includes a number of performers slightly hampered by the stilted English accents they adopt but there are delightful scenes with Timothy Spall and Oliver Platt as Ginger’s affectionate gay godfathers Mark and Mark 2 and Annette Bening as their activist friend Bella. Alice Englert is shortchanged by the underdeveloped role of Rosa but Elle Fanning makes an appealing Ginger, raw with emotion, easily hurt and filled with all the vulnerability of an adolescent making her transition into an adult.