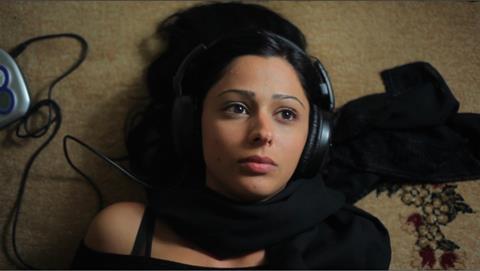 The story is familiar. A young man and woman in love are thwarted by the intervention of their families and their efforts to break away and be together ultimately result in a tragic end.

However, much of this familiar template is overcome by the uncommon cinematic setting of Gaza in 2001. Debuting feature filmmaker Susan Youssef employs the religious and political turmoil of the period as well as the region’s exotica to breathe new life into the Romeo and Juliet-style romance that’s credited as a retelling of a seventh century Arabian saga.

The spare production is a tad too earnest for wide release but should pick up some sales in sophisticated markets with the potential to perform modestly on the thrust of encouraging reviews. It also benefits from its social and political resonances that feel more contemporaneous than its calendar setting.

The protagonists, Qays (Kais Nashif) and Layla (Maisa Abd Elhadi), are students attending University in the West Bank. It’s a time of growing political unrest and security concerns find them compelled to return to Gaza; Layla to a very conservative religious family; Qays to a refugee camp.

In order to gain favor with the family the young man must provide a dowry he patently cannot afford. He effects a plan that her father easily recognizes as fraudulent and Qays understands he must take drastic measures to push his cause further. When he vows his love in poems written on buildings in the town, the affair is viewed as scandalous and steps are taken to find a more appropriate husband for Layla.

The inner workings of the village and the rise of Hamas (her brother enlists in the movement) provide the drama with an immediacy that’s palpable and affecting. Qays’ life is put in danger and the specter of death looms organically following hard on beatings and humiliation.

The film takes on additional power when he leaves the area and Layla pursues him. While not exactly a travelogue, Habibi takes on a pictorial quality with the stark beauty of the region captured hauntingly by cinematographer P.J. Raval and the indigenous music score of Menno Cruijsen.

The lovers become outcasts hunted both by political extremists and Israeli military who want them to become spies and are not beneath employing torture to make their case. Qays is more pliant, believing he can leverage cooperation for a ticket to the Netherlands. But Layla ultimately finds it impossible to defy her family and the relationship becomes stablemated save for the violent aspects of their surroundings.