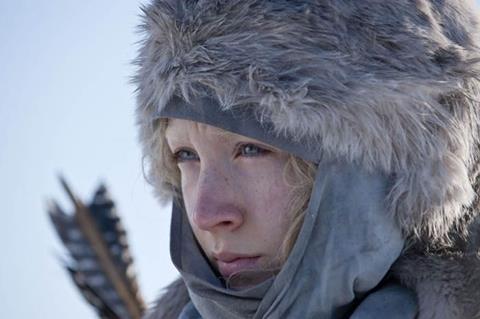 Eschewing the expectation that he perhaps stick to cranking out handwringing dramas of uptight manners, Atonement and Pride & Prejudice director Joe Wright veers in a surprising new direction with the revenge thriller Hanna, which courses with an unflagging, forward-leaning vigor. The engaging results, which feel like a bold, purposeful step toward modernity on his part, show he has a good instinct for melding the dynamics of a more conventional piece of pop action entertainment with something a bit offbeat and barbed.

Saoirse Ronan imbues her character with depth, and also handles the considerable physical demands with aplomb.

Critical support will be key in helping Hanna connect with both arthouse audiences who might regard its plotting or adrenalised tone as tough to swallow, and action audiences skeptical about its adornments. International returns in particular should be fairly robust, though, as should be long-play ancillary value, since this is the type of film that could easily merit an additional viewing.

The film opens in the snowy wilds of Finland, where 16-year-old Hanna Heller (Saoirse Ronan) has the strength, stamina, smarts and lethal combat skill set of a soldier twice her age, thanks to the intense training of her father Erik (Eric Bana), an ex-CIA agent. The reasons for their curious, extreme isolation come into focus when Hanna indicates her readiness to finally accept a long-planned quest of revenge against a seemingly ruthless government operative from Erik’s past, Marissa Wiegler (Cate Blanchett).

As Hanna tries to carry out her solo mission and then reunite with Erik, darker secrets about both her past and her father’s relationship with Marissa color the wild, life-and-death struggle for which she’s been preparing her entire life.

Hannastarts with a bang, like a thoroughbred horse out of the starting gate, and though on rare occasion it feels like it suffers from a case of slight stylistic overreach, a narrative significance and reasoning for this tack develops, and so Wright plugs into a punkish energy arguably not as convincingly attached to a female action protagonist since Run Lola Run.

Since Hanna is constantly learning more about her past, too, the movie is gripping as a quasi-amnesiac thriller, a la The Bourne Identity. The little-girl-assassin underpinnings make the film sound vaguely like Kick-Ass, but Hanna’s human contours make it more rooted in character, and reminiscent of something like The Professional, albeit with a few booster supplements.

An undeniably strong selling point of Hanna is also found in its bristling, innovative score from the Chemical Brothers, which alternately gurgles, throbs and pulsates, sounding at times like a Madhatter’s rave. It’s an exceptionally imaginative soundtrack that expands upon staid notions of film scoring, and should be remembered come awards season.

Blanchett’s steeliness gives Hanna a welcome edge and depth, since one hypothesises her inflexibility is rooted in some moral reasoning. Wright, meanwhile, obviously has a good rapport with his Atonement collaborator Ronan, and it is the latter’s preternatural maturity that powers this ride. She imbues her character with depth, and also handles the considerable physical demands with aplomb.