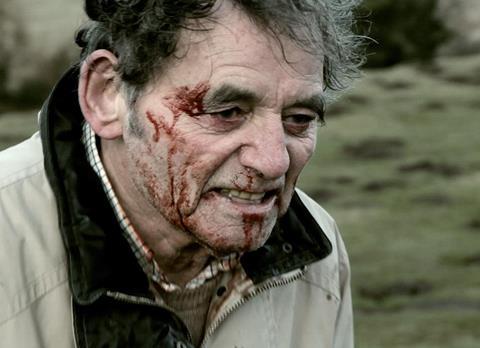 This low-budget British zombie-comedy is a real unpretentious delight, and despite being more a tender and oddball romance rather than out-and-out horror fare, it is always watchable and punctuated by a series of engaging performances that belie the film’s modest origins.

It is not a film brimming with horror – and may disappoint gore hounds – but it is a real low-key pleasure.

Almost affectionately made by writer/director Keith Wright (who also handles cinematography and editing chores) and resolutely set in the North of England, Harold’s Going Stiff (the semi-porn title hints at the humour integral to the film) may well be brief in running time but it delivers in terms of genial emotional impact. It has played the festival circuit for a while – mainly at genre events – but also deserves to find sale attention.

The premise of the film is that ORD (Onset Rigors Disease) is hitting the UK – with sufferers (only men) growing increasing stiff, gradually losing their faculties and eventually turning to violence – though a cure might lie with elderly Harold Gimble (Stan Rowe), who was one of the first to contract the disease, but seems to be spared the later violent stage.

It looks as if he shows signs of recovery thanks to the tender ministrations of his carer Penny (the charming Sarah Spencer), a plump and jolly young woman who is looking for love, but starts to find close friendship, affection and old-fashioned good manners in the company of Harold.

But danger lurks on the nearby moors where a trio of club-wielding vigilantes vigilantes (played by Andy Pandini, Lee Thompson and scene-stealing Richard Harrison) roam, aiming to kill as many zombies as possible….and for them killing Gimble, the originator of the disease, would be a dream come true.

The scenes of them bashing in the heads of zombies (who run in a funny stiff-legged gait) are gory in a very low-budget way, but the heart of the film lies in the funny and tender relationship between Penny and Harold as Harold’s Going Stiff flies close to zom-rom-com territory.

The film was shot in just nine days in and around director Keith Wright’s hometown of Sheffield using one small Digital SLR and only natural light, and was largely improvised. It is not a film brimming with horror – and may disappoint gore hounds – but it is a real low-key pleasure, with Stan Rowe and Sarah Spencer terrific as the couple who discover an unlikely friendship set against the backdrop of impending horror.