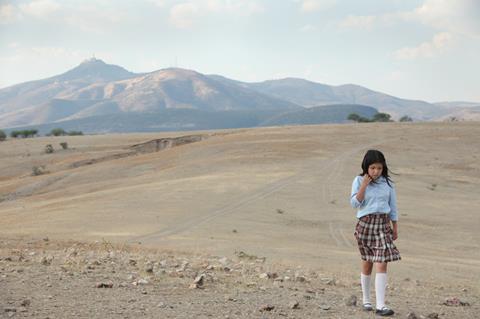 Mexican director Amat Escalante has come to specialise in startling, borderline-surreal scenarios of brutality, but his third feature Heli –following 2008’s US-set Los Bastardos - is all the more distressing for being drawn from headline reality. Set against the background of Mexico’s current drug wars, Heli is about innocents drawn by chance into the inferno of narco killing.

Heli is dispassionately filmed, the crime story recounted with a largely forensic matter-of-factness, although stylistic flourishes and deliberate pacing subvert the realism and load it with an eerie, dream-like quality.

Stylistically a slow-burner, Heli is nevertheless remorselessly confrontational, observing violence unflinchingly and – many viewers will feel – in barely tolerable detail. While the film is deeply realistic at base, Escalante’s stylistic mix of long takes, elliptical editing and unexpected camera moves pushes it into the realm of bad dream.

Unapologetically tough viewing, Heli will be a difficult sell, and potentially a headache for certification boards. Just how rewarding its harsh vision is, that’s another matter - and while Heli’s competition slot will boost his auteur prestige, it’s not quite the decisive coup de cinema that Escalante’s admirers might have hoped.

Set in the Guanajato region of Mexico, the film begins with a brilliant extended shot that starts with a close-up on two bloodied bodies in the back of a truck. The sequence ends startlingly with a hanging, then backtracks to show the events leading to this summary execution. Heli (Espitia) is a young factory worker living with his wife Sabrina (Linda Gonzalez) and their baby, his father and his sister Estela (Vergara).

The latter, though only 12, is besotted with 17-year-old police cadet Beto (Palacios) who’s constantly putting the moves on her. Beto – seen going through humiliating paces as part of his cadet training - lays his hands on a stash of cocaine that has escaped burning as part of a government PR routine.

He hides it in Estela’s family’s water tank, but when Heli finds it, the well-meaning young man tries to do the right thing by dumping the drugs in a well. This instantly leads to reprisals, and to Heli and Beto being handed over – seemingly by government militia - to a narco gang.

At this point, things get grueling. While Estela is whisked away who knows where, the two captives are tortured by gang members. This extended, coolly observed scene makes for a challenging watch, with Beto beaten before having his penis set on fire – yes, you read that right. It’s a horrifying spectacle, only just about watchable because you can’t help being distracted by the question of how it was actually filmed.

Released relatively intact, Heli returns home only to find himself quizzed by a duo of unsympathetic cops. The story ends, against all odds, with some hope offered that, no matter how grim things have got for the family, there may conceivably be reconciliation in sight.

Heli is dispassionately filmed, the crime story recounted with a largely forensic matter-of-factness, although stylistic flourishes and deliberate pacing subvert the realism and load it with an eerie, dream-like quality - especially when an elegant, completely unexpected crane shot pulls back from Sabrina discovering the chaos that’s erupted in her home.

Even so, glimpses of TV news suggest that we’re watching a film very precisely rooted in recent Mexican reality, with some considerable anger to vent against corruption and incompetence in official approaches to drug crime.

At any rate, this is a state-of-the-nation drama of a very uncomfortable kind – arguably more uncomfortable than Gerardo Naranjo’s similarly themed Miss Bala, which tended to glamourise its subject with action-movie overtones.

It’s moot, though, whether the merciless lucidity of Escalante’s gaze entirely pays off. It’s hard not to feel that the torture scene is too graphically confrontational to have any substantially emotive effect; and the tactic of making us complicit in the violence (underlined by bored boys playing video games in the background) revisits ground well worked over since Michael Haneke’s Funny Games. What works strongest for Heli is its understated compassion towards its hapless characters, thanks to a sympathetic cast whom Escalante encourages to underplay, at times, almost to a Bresson-like degree.