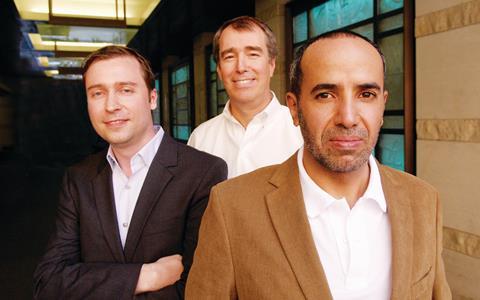 As international sources of finance have dried up over the last two years, many thought the Middle East could be the next key provider of funding for independent film. If that has not materialised as anticipated, it is probably because those with the wherewithal in the Middle East do not want to be seen as merely cheque-writers for Hollywood nor be burned by hasty investments. When they become involved with film, it has to be on their own terms.

Take the Emirate of Abu Dhabi, which is actively diversifying its economic model away from natural resources and investing tens of billions of dollars into arts and culture through the four-year-old Abu Dhabi Authority for Culture & Heritage (ADACH) with a view to making Abu Dhabi a worldwide cultural centre. As part of that impulse, the Abu Dhabi Media Company (ADMC) was created in June 2007 as the chief media operation in the country with publishing, TV, radio, digital media, distribution and printing interests.

It was only a matter of time before ADMC became involved in the film business and in September of the same year, ADMC and real-estate developer ALDAR announced a long-term strategic alliance with Warner Bros for the creation of a theme park, hotel and multiplex cinemas and co-financing agreements for feature films and video games.

“If Participant is making a movie, we are making it. If we don’t want to make that movie, then we stop it before it’s made.”

Indeed the Warner Bros deal was just the beginning of ADMC’s film plans and between 2007 and 2008, under chairman Mohammed Khalaf Al Mazrouei, it hatched a new subsidiary, Imagenation Abu Dhabi (pronounced ‘image nation’), to channel $1bn into film content for regional and international markets. Ed Borgerding, a veteran Disney International executive, was hired as chief executive with a remit to forge relationships with producers around the world and build a regional film-making infrastructure.

It has been a year since the company was announced in September 2008, and Image­nation already has five films in the can and another two or three set to go before the cameras by December.

The strategy is an unusual one. Imagenation has struck partnerships with three US-based production outfits: Participant Media (announced in September 2008), National Geographic Entertainment (October 2008) and Ashok Amritraj’s Hyde Park Entertainment (November 2008). Imagenation has established a separate joint venture company with each partner which is financed equally by both. “That [JV] company finances the movies,” explains Borgerding, the no-nonsense American who runs Imagenation. “So we are all equal partners in the films. And any film they make, we make.”

Under the agreement, the partner companies cannot back other films outside the Imagenation partnership. “We’re partners,” reiterates Borgerding. “There are no opt-outs in our relationships. If Participant is making a movie, we are making it. If we don’t want to make that movie, then we stop it before it’s made. They can’t make it on their own. That’s not how we work. Our interests have to be aligned. So far the relationships have been pretty successful.”

The three companies were targeted by Borgerding on a number of criteria, principally that they could bring equal capital to the table. “We didn’t want to be the financing partner,” he says. “We wanted companies that could match us economically because we weren’t just going to bankroll other people to make movies.

“Second, we needed to have a common view of how the film industry worked and how it is changing, and third, we are in this business so that we can foster the pedagogical exchange of knowledge in Abu Dhabi, so each of the joint ventures has an office in Abu Dhabi.”

“We wanted companies that could match us economically because we weren’t just going to bankroll other people to make movies.”

Each company has or is in the process of hiring an executive to run the Abu Dhabi office and then “hire locals from the region and set up this dialogue with LA so that anything that happens from development to distribution is happening in LA and in Abu Dhabi simultaneously. That is a crucial element to us.”

The first films to emerge from the partnerships are Peter Weir’s The Way Back, from National Geographic; Fair Game, Furry Vengeance and The Crazies from Participant; and, from the Warner Bros deal, Robert Rodriguez’s Shorts.

Borgerding and COO Stefan Brunner explain that, while Imagenation is unlikely to endorse or finance films with confrontational religious or political subject matter, the sex and violence you would see in any Hollywood movie are less contentious.

“Sex and violence are not necessarily a problem,” says Brunner. “But you have to respect the country you’re doing business in and that country’s values. Having said that, problematic content hasn’t come up as an issue. If you look at the movies we’re discussing with our partners, you wouldn’t see a single problem there ― 98% of the movies coming out of Hollywood wouldn’t pose a problem.”

“There aren’t that many movies out there that touch on Middle Eastern politics,” adds Borgerding wryly.

Distribution on the partnership companies is handled differently by each. Participant has a worldwide deal with Summit, while Hyde Park and National Geographic negotiate domestic on a picture-by-picture basis and have their own sales arrangements, the former in-house and the latter with Essential Entertainment.

“We’re actively negotiating with some of the domestic distribution companies for deals where they like the projects we are making and value our ability to make the right kinds of films for the right prices, so I think we’re reasonably well positioned for our domestic,” says Borgerding. “A lot of people have pitched us to set up an in-house sales arm but we don’t really add anything to that. There are so many excellent people doing that so you can rent the skills at a reasonable price.”

“You have to respect the country you’re doing business in and that country’s values.”

A fourth partnership deal was recently struck with Walter Parkes and Laurie MacDonald’s Parkes/MacDonald Productions for the establishment of a $10m joint venture development fund for future projects from the producers. Although Parkes and MacDonald have a first-look deal with DreamWorks, some of the projects developed will be channelled through one of the three affiliate companies.

Indeed, Imagenation would rather direct single projects into its partner companies than finance any film outside them. “People bring us fantastic [outside] projects all the time,” says Borgerding. “The idea is to try to push them into these relationships because the value chain is all set up. We have three great production companies with the distribution set-ups and the management structure to nurture the projects through the value chain. Within that it gives us a lot of room.”

Meanwhile on the local level, Borgerding and Brunner are working on two fronts ― films in Arabic principally for the UAE market, and international films in English based on Arabic stories and myths. “We are also going to make movies with the best film-makers from around the world,” says Borgerding. “We want to make Chinese movies and Bollywood movies, maybe even Japanese or Korean. The founding vision was not just to make a bunch of movies in Hollywood.”

As part of that initiative, Imagenation expanded its relationship with Hyde Park to create a strategic alliance with Singapore’s Media Development Authority (MDA) whereby Imagenation and Hyde Park will fund 15-20 films over the next five years with a production value of $75m. The venture will be headquartered in Singapore and focus on Asian cinema.

Ultimately, as the volume of films going through Imagenation increases, Borgerding says the company will create a valuable asset for Abu Dhabi in a studio-style producer and a large library.

“If you go into Hollywood the way the hedge funds did, the tax money or the Japanese, you will get wiped out,” says Borgerding. “You make deals, give the money and let them run with it and three years on you leave.

“But if you go into the market with an understanding of what it is, in a professional way, you’re going to be able to sustain yourself over time. If you do it for three years and go out of business, what was the point? The value of the business is the sustainability.”

Joined ADMC in 2007 after several years in the UK on hiatus from the industry with his family.

Was executive vice-president of Walt Disney International in Hong Kong until 2000, overseeing the operating units of the company in the Asia Pacific region including India and the Middle East. First worked with Stefan Brunner while producing Wolverine And The X-Men, a 26-episode animated TV series together with Marvel and First Serve Toonz, which was completed in 2007.

In 1995, established the first Disney Channel outside the US in Taiwan, and opened the channel in UAE and Australia in 1997.

Began his career at Disney in Burbank working in theatrical distribution and marketing before moving to London in 1984.

Chief operating officer of Imagenation Abu Dhabi l Joined Imagenation as chief financial officer when the company was launched and since promoted to COO.

Prior to EVA, was head of business affairs at Tandem Communications in Munich.

Bachelor of business administration from the University of San Diego; MBA in media management.