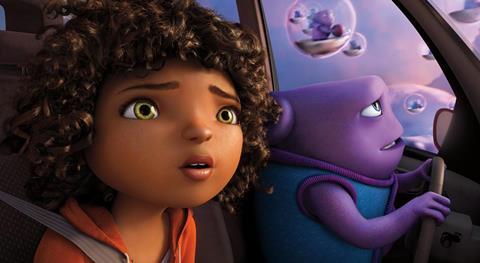 With its sweet tone and candy-coloured palette, Home is a 3D animated confection that makes a lightweight addition to the DreamWorks Animation (DWA) catalogue. It should go down reasonably well with younger children – especially girls – but it doesn’t offer a lot – aside from its demographic-spanning voice cast – to satisfy a broader audience.

A sequel to the source novel was published in the US just last month, so DWA and Fox will certainly be hoping that Home performs well enough to justify a follow-up film.

The cosy sci-fi comedy opened strongly in the UK and a number of other territories on March 20 (with $9m) and looks set to fare much better internationally than domestically, just as DWA’s Penguins of Madagascar did last November (taking $82.8m in the US and Canada and $282.9m elsewhere). A March 27 Stateside opening keeps the Fox release away from family animation competition and at least gives it a chance to maximise its US potential.

Based on popular 2007 children’s novel The True Meaning of Smekday, the story centres on Oh (voiced by Jim Parsons, from TV’s The Big Bang Theory), a misfit alien whose friendly but pushy people, the Boov, led by the blustering Captain Smek (Steve Martin), plan to take over the Earth to avoid their enemies the Gorg.

Oh ends up on the run from his own kind and forms an unlikely friendship with young human Tip (R&B star Rihanna), who is trying to find the mother (Jennifer Lopez) she lost touch with during the Boov invasion.

As directed by Tim Johnson (who previously made DWA’s Over the Hedge), the film gets plenty of mileage out of the Boov, a relationship-phobic bunch who speak comically fractured English and change colour according to their emotional state. With their curly ears and gap-toothed faces, the Boov are fun to watch, if a little generic.

Home’s animation isn’t particularly sophisticated and doesn’t come close to the work in DWA hits such as How to Train Your Dragon. But the story has a pleasant warmth to it – together with a vague message about individuality and tolerance – and Parsons does a terrific job bringing the charmingly open-hearted Oh to life.

A sequel to the source novel was published in the US just last month, so DWA and Fox will certainly be hoping that Home performs well enough to justify a follow-up film.