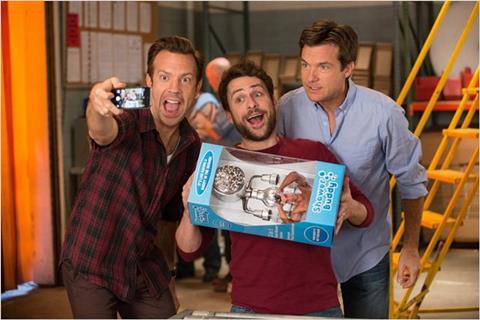 Maybe there is an anti-capitalist subtext to Horrible Bosses 2, but while there are more than a few laugh-out-loud moments there is a niggling sense that this ribald sequel is just trying way too hard, with the semi-improvised gags colliding and clashing rather than slotting sweetly together. But though it lacks the surprise factor of bosses behaving extremely badly that helped the original crack $117 million in its 2011 US release it will likely find a welcoming audience for those keen on a dose of rude’n’crude comedy in a marketplace currently bereft of mainstream comedy fare.

The film does drag rather as it layers on action to the climactic proceedings, but then this is what the Horrible Bosses format is all about – over-the-top rude-and-crude silliness that tries to overpower its audience rather than draw it in by wit and cleverness.

The original film saw hard-working sensible Nick (Bateman), frisky Kurt (Sudeikis) and permanently worried Dale (Day) plotting to work together to dodge their machinating bosses, even resorting to an inept triple homicide plan. This time round they have aspirations to become bosses themselves as they plan to launch their own company to sell their bathroom accessory The Shower Buddy.

Millionaire retail giant Bert Hanson (Christoph Waltz) offers to take their first 100,000 units for a hefty $3 million, but after the naïve threesome spend a fortune setting up their manufacturing operation he reneges on the deal, announcing that he wants to see they go of business and then pick up what remains at auction. The desperate three decide to kidnap Hanson’s son Rex (Chris Pine) – after some advice from old friend Dean ‘Motherfucker’ Jones (Jamie Foxx, one of the best things in the film) and Nick’s former boss (played with vicious zeal again by Kevin Spacey) who is still in prison – but naturally their plans fall apart.

Rex soon gets the upper hand and announces that he wants to be kidnapped so he can take revenge on his domineering father. The plot manages to leverage in the reappearance of Dale’s ex-boss Dr Julia Harris (Aniston), who is using her sex-addiction class as a place for scouting new sexual conquests, and while Aniston adds some genial pep to the proceedings the film itself struggles to find the balance between comedy and action (there are car chases and gunplay), with the overlapping comedy dialogue between Jason Sudeikis and Charlie Day hampering rather than helping. The desperate need for laughs give the film an edgy hyperactive quality that, and while there are some memorable moments the subtle laughs get submerged.