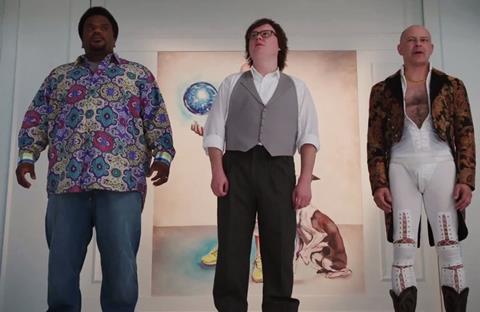 With more gonzo humour and less of the wistful backstory, Hot Tub Time Machine 2 makes for a workmanlike sequel to an original that was a mid-level US hit five years ago. Reuniting most of the first film’s cast and crew, but missing top-billed John Cusack and the sense of eighties nostalgia that came with him, this second dip in the R-rated comedy water should be able to exploit audience affection for the original even if it doesn’t do much more.

Returning director Steve Pink has less dramatic structure to work with than he did in the original and ends up letting the film rely mostly on incidental bits of comedy business.

When it opens wide in North America on February 20, the Paramount-distributed sequel will be chasing the $50.3m domestic gross achieved by the MGM-distributed original in March 2010. The original managed only $14.3m internationally, but thanks to title recognition the sequel might do better.

After their time-tripping exploits in the original, raunchy Internet mogul Lou (Rob Corddry, most recently seen in Sex Tape) and r’n’b impresario Nick (Craig Robinson, from This Is The End) are now fabulously wealthy. But when Lou gets shot - in the dick, naturally - the two friends and Lou’s estranged son Jacob (Kick Ass’s Clark Duke) fire up the old hot tub again to go back to the past and stop the assassination attempt.

They end up in the future, where they meet Adam Jr (Adam Scott, from sitcom Parks And Recreation), the prissy son of Cusack’s now mysteriously absent character from the first film.

Taking over centre stage from Cusack, Corddry is the comedic force that holds the film together. Scott is appealing enough as the only significant new character, Chevy Chase reprises his brief role from the original and Christian Slater makes an uncredited cameo.

Returning director Steve Pink (who most recently made About Last Night) has less dramatic structure to work with than he did in the original and ends up letting the film rely mostly on incidental bits of comedy business. Though some of it works, a lot of it feels rehashed from the first film.