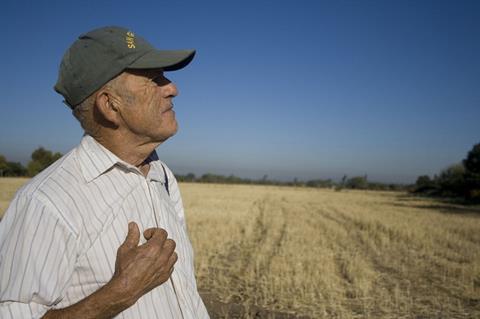 Chilean first feature Huacho looks at first as though it’s about to reiterate a familiar message: folks in the country have it tough, but roll up their sleeves and get on with it anyway. While this is pretty much the gist of Alejandro Fernández Almendras’s film, an unusual structure and some acute observations make this exercise in rural realism an involving, quietly rewarding experience. A labour of love in the best sense, the downbeat but accessible Huacho should overcome its obvious commercial limitations to intrigue some specialist art-house buyers, although it will find its truest audience on the festival circuit.

The word ‘huacho’ literally means ‘bastard’ but is also used in this particular region of Southern Chile to mean ‘abandoned’, like the rural family whose everyday challenges form the film’s subject matter. Former critic Almendras, himself from this region of the South, offers a fiction with a strong documentary feel, sketching out a single day in the life of a peasant family, beginning with a power cut and ending with the four characters – son, mother and grandparents – reunited at the table. Individual sections follow each character through the daily rounds, each episode offering new insights into the changing nature of peasant life and the harsh economic realities that threaten it.

Huacho is bookended by two sections that most directly echo the tradition of rural documentary. In the opening episode, grandmother Clemira (Aguayo) tends to her chickens and makes the cheese that she sells by the roadside. The price of milk has gone up, forcing Clemira to charge more in turn, but city folks driving through baulk at her prices.

Clemira’s daughter Alejandra (Yáñez), who works as a cook in a local tourist spot, fails to get an advance from her employer, then heads into town to get a refund on a newly bought dress so as to pay the electricity bill. Next, young Manuel (Hernández) goes to school in the city, and fails to get his turn on  a Playstation game, a privilege he has apparently paid for. Shunned by his schoolmates, who come from well-heeled families and mock him as a peasant, Manuel – whose future, we can’t help thinking, will be in the city rather than the fields - ends the day alone in a games arcade.

The film ends in more familiar rural territory as grandfather Cornelio (Villagrán), a garrulous raconteur to whoever is around to listen, erects a fence, then has a snooze al fresco. The matter-of-fact nature of this section, simply showing Cornelio’s day without comment, recalls the rigorously detached approach of fellow Latin American director Lisandro Alonso (La Libertad), but in a much less consciously art-cinema manner.

In this undemonstrative but engaging film, little ostensibly happens, rhetorical commentary is at an absolute minimum, and yet we learn much about a certain way of life and the rural-urban divide in this region. While the theme of endangered rural populations is timeless, Huacho clearly has particular relevance to the current state of the global economy. Almendras’s non-professional cast – whether they are acting or effectively being themselves or versions thereof – are certainly very comfortable in front of the camera. By the time the film reaches a quietly hopeful ending, Huacho’s objective, sentiment-free approach has paid off in imparting an enormous respect and tenderness towards its characters