Director Ian Power and producer Macdara Kelleher (Fastnet Films) talk to Andreas Wiseman about their feature The Runway, which had its international premiere at the Rome Film Festival last week. 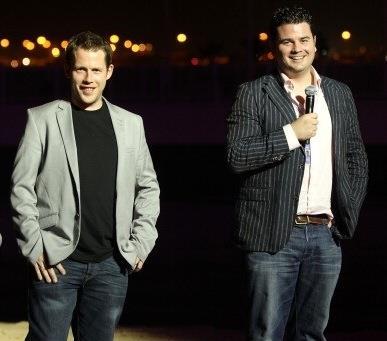 In Ian Power’s Ireland-set feature debut, The Runway, Demian Bichir (Che) plays a stranded pilot who strikes up a friendship with a local boy (first time actor Jamie Kierans) and his mother, played by Kerry Condon (The Last Station), while locals band together to find a way to get him back to Columbia.

The comedy-drama was inspired by the true story of a Mexican pilot, Reuben Ocana, who crash-landed on Mallow racecourse, Ireland in the 1980s. When the plane’s insurance company demanded its safe return, locals rallied constructing a temporary runway.

The Runway picked up the Best Irish Feature award at the Galway Film Festival and screened in the Alice In The City section of the Rome Film Festival. 6 Sales is shopping the film at the AFM, where it receives its market premiere, and it has already sold to Quality Films (Mexico) and Falcon (Middle East).

How did the project come together creatively and financially?

IP: I had seen an RTE programme that was very similar to the BBC’s The Rock N Roll Years on which they played music to archive footage of news events. I saw the footage of Reuben Ocana - this dark handsome guy in the middle of Irish country folk – and it really stood out.

But I also thought about where I was in 1983. My parents had moved from Dublin down to Wexford and it was a complete culture shock. I really didn’t fit in and found it hard to adjust. Around that time I saw Spielberg’s E.T and it really hit home. For me the idea of a friend dropping out of the sky seemed way more attractive than trying to forge relationships in this strange environment. When I thought back to that I started to imagine the story.

MK: We developed The Runway with the Irish Film board. They signed off the draft in 2008. That summer I was in Cannes where I met a young Luxembourgish producer called Bernard Michaux. He read it, really liked it, and told me he thought it would work in Luxembourg where we could take advantage of some of their tax breaks. The Luxembourg Film Fund also put some money in. A little over 50% of the film is shot there - all the interiors and a few of the exteriors. We got a sales advance from Quickfire and some money from Film i Vast, who I had worked with before. We also got some MEDIA money.

The film has a strong message about the importance of a welcoming community, something for which Ireland is famed…

IP: Yes, but when I started writing the film Ireland was at the height of its economic boom and for a country that was famous for its generosity and warmth we had become this bunch of Gordon Gekkos.

MK: In the 80s Ireland was a very poor country. What they did in Mallow was so selfless. People really banded together. The economic situation is bad again in Ireland at the moment, but there’s a spirit there now. There’s an echo of that 80s situation and that adds to how the film plays at home.

Did you shoot in the same place that Rueuben Ocana crashed?

IP: We couldn’t shoot where it happened because that area has become hugely developed. I wanted to shoot it somewhere small so that the audience can spend more time with the characters.

MK: We shot in Schull, west Cork. We chose a place with only one modern building. It was perfect.

How did you choose your young lead?

IP: I went to every primary school in Cork and saw about two and a half thousand kids. I narrowed them down to five over a process of weeks. But Macdara and I realised that the two kids we needed weren’t there. So, we started over and did another two and a half thousand kids. This time we went younger and found Jamie, who was eight. John Carpenter [who plays the lead character’s sidekick, Frogs] hadn’t showed up to audition but was accompanying a friend and was only interested in going to McDonald’s! But he turned out to be magical.

The film revolves around an impressive WWII plane, which is stuck in a boggy field. That must have been difficult to set up?

IP: I had initially conceived of a B-29, the Enola Gay type. But that turned out to be 200 feet long, with a similar wingspan. Then I saw the B-26 Marauder, which has the same vibe but is smaller. We got in touch with a vehicle designer called Gary Greenberg and he built the plane with the production designer in very quick time. It was cheaper than getting a real one.

MK: They shipped it over from UK in eight pieces and had to crane it up, weld it and assemble it in the field. It took days to move around but it was a great sight when it arrived. The interior cockpit was built in Luxembourg.

The film has a rollicking soundtrack, and music is very prominent in the film. Why was that?

IP: When we set out to make the film we didn’t want to make an 80s pastiche and have people going round in Miami Vice jackets with their sleeves rolled up, because Ireland wasn’t like that in the 80s. We shot using filters that everyone used in the 80s and aimed for the classical Scott brothers look. It worked so well that when it came to music I started to think about kind of music was played in 80s films. I realised that a lot of that was 50s and 60s rock and roll music. It worked instantly. The problem was that we didn’t have a budget for all the music I wanted to put in.

MK: We went to Ross Pelling at Universal and he was brilliant. He started firing songs at us and there was some really great stuff. Funnily, U2’s Electric Co is one of the only 80s songs in the film. We also had a Luxembourgish composer, Gast Waltzing. He bridged the music nicely.

IP: I think when you’re directing you’re a frustrated writer and when you’re writing you’re a frustrated director, if you’re a writer-director, that is. We only finished thee weeks ago, but straight after the shoot I started writing something completely different, a thriller set in London called Closed Circuit. It’s going into a second draft. I sent it to Macdara and he responded well to it. I don’t want to over think it. I realise that you’ve got to go out and make films and not worry about re-inventing the wheel every time. I’m hoping that in three weeks I’ll have finished the second draft.