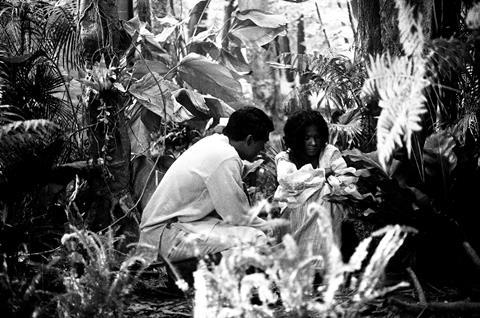 Raya Martin is only 24, but he is heavily, and admirably, committed to two overlapping projects: the appropriation of indigenous Filipino history after Spanish and American colonisation; and the laying bare of cinematic illusion. Independencia is the second in a trilogy, following A Short Film About the Indio Nacional (2005), which dealt with the struggle for independence from Spain in the late 19th century and was made in the style of silent films. The American occupation of the Philippines after the Spanish-American War is the backdrop of Independencia, and its aesthetics are borrowed from early studio talkies.

Martin uses black-and-white footage, patently false backdrops, overacting performers, and even a false newsreel, revealing the normally hidden projector light before and after. This is hardly the stuff of the marketplace, but should find eager viewers in festivals and cinema studies classes.

The occupiers are onscreen for only a few seconds. Martin focuses almost entirely on a small family, at first a mother (Agbayani) and son (Lucero) who, like many Filipinos under both the Spanish and the Americans, feel compelled to leave town for a less dangerous rural life.

They move into an abandoned hut adjacent to a lush tropical forest. The mother dies, and the family is now comprised of a more grown-up version of the son (same actor, now bearded and long-haired), the young woman called in the credits “the Stranger” (De Rossi) who had moved in with them after her ostensible rape by U.S. soldiers, and the very light-skinned boy (Aguilos) she gives birth to.

Generically, Independencia is as melodramatic as they come. Besides the family narrative and the acting style, the music, as lovely as it is, is continuous, insistent, and frequently mournful, with horns, guitar, flute, violin, and cello accompanying or anticipating every element of what little plot exists.

On account of Martin’s political and formal strategies, most screen time is taken up by the routines of rural life and drastic changes in the weather. We are saved from boredom by the one character telling stories to the others, most of them based on mythology and superstition, and some fine sound effects, most notably the ongoing, high-volume sounds of insects and the river. True to the genre, nothing ends well.