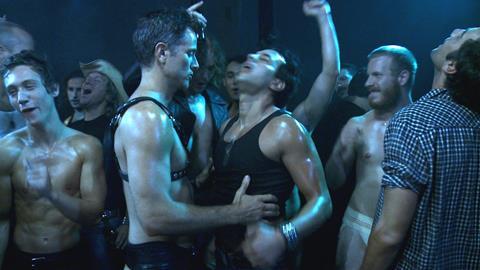 Travis Matthews and James Franco use the controversial cuts to William Friedkin’s film Cruising (which screened at Berlin in1980) as way into deconstructing how male homosexuality is dealt with in cinema, and while the film is perhaps too short to make an impact as a theatrical release it will be an easy fit into other film festivals where its running time and explicit footage will work astutely.

Interior. Leather Bar. is a fascinating and intriguing film that never takes any simple options and works well in terms of raising provocative issues.

The film playfully veers between reality and fiction – to the extent that it is never fully clear what Matthews and Franco are trying to achieve and how much they are playing characters – and while it never fully makes an attempt to reveal the truth behind the lost 40 minutes from Cruising (which allegedly featured overly explicit scenes, cut to secure the right rating for release) it smarty dwells on Hollywood homophobia and clichés.

The jumping off point for Interior. Leather Bar. Is the notion that Franco and Travis will shoot a film that would replicate the 40 minutes, largely set in a gay leather bar where – in the film – the undercover cop played by Al Pacino has more than a few close encounters with a series of burly leather-clad gentlemen. Travis seems to handle to actual directing chores, while Franco drops in and out to express his thoughts on wanting to show more gay sex in mainstream cinema and also offer haphazard support to actor Val Lauren, who is to play ‘Al Pacino’ in their film.

In Cruising, Pacino played a cop hunting for a killer of gay men, and Lauren (who played Sal Mineo in Franco’s film Sal) – or perhaps Lauren the ‘actor’ – is slightly worried about playing a straight man in a 1980s leather bar. The debates he has with Franco allow for much mulling over sexual representation, though the film never offers any easy answers, with much of the dialogue clearly scripted, presumably also the footage of the initial discussions about the project.

The debate about how sex should be seen on screens is occasionally intercut with footage of the lost 40 minutes being replicated, along with the stylishly shot re-enactment itself. There are moments of explicit sex, but these are minimal, with the Cruising link really a starting point for Franco’s crusade to bring explicit gay sex to the screen. Quite how this will sit alongside his upcoming lead role in Disney’s Oz The Great And Powerful remains to be seen, but as a creative type he has always liked to keep his options wide and varied.

To a certain extent because Franco and Matthews keep the film vague in terms of what reality they are trying to expose it eventually loses its impact, but there is no denying that Interior. Leather Bar. is a fascinating and intriguing film that never takes any simple options and works well in terms of raising provocative issues.