The Canadian former lawyer talks to Alec Govi about the screenplay he co-wrote with director Todd Phillips and Jason Smilovic about two savvy young Americans who scored a $300m arms contract with the US government. 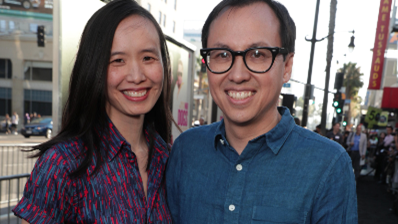 Chin spoke about how his research trip in Iraq inspired the screenplay for War Dogs, which eventually shot in Miami Beach, Arizona, Morocco, Romania, and Los Angeles.

Jonah Hill, Miles Teller star and the film opens on August 19 in North America via Warner Bros and August 29 in the UK. Chin is pictured with his wife Elaine. Pic credit: Eric Charbonneau.

You originally went to Iraq to tell another story about two men. How did that contribute to the War Dogs script?
In 2004, I was trying to make the transition from being a former lawyer and producer to being a writer, and I was having a very difficult time because no-one took me seriously. I decided to go to Baghdad to get the life rights to these two young guys who snuck in there to start a radio station, since I couldn’t option [an] article that was written about them.

My journalist friend said that you need to hire a smuggler and cross the border of Jordan to get into Baghdad. And when I asked if it was dangerous, he said that you could get two trucks to make your way in, so that if you get chased by the ‘bad guys’, you at least have a 50-50 shot of getting away. [This would inspire a scene in War Dogs.]

Also, the Rolling Stone article that we optioned [Guy Lawson’s Arms And The Dudes, which Philips optioned in 2011] didn’t get into detail about how exactly Efraim and David [War Dogs protagonists Diveroli and Packouz] scored this huge contract, instead painting them as just stoners, kids, idiots and focusing more on the political aspect of US defense spending.

But I knew from my time in Baghdad that there was no way that these guys in their twenties got such a big contract by just stumbling into it. I wanted to find out what the real story was, and so did Todd. So that prompted us to want to travel to Miami and actually meet these guys.

Why did you tell the story from the perspective of David Packouz?
The idea of David being generically anti-war but not really thinking deeply about what he was getting into [partnering with gun-runner Diveroli], was certainly meant to be a metaphor for an America that got into a war naively, and agnostically went along as things got more and more out of control and more and more money was spent. So I thought it would be really interesting to show the story from David’s perspective, as someone who was a more average American and not already a gun dealer or a gun runner, and his experience as he got closer and closer and more deeply involved in it.

The film seems very timely as Congress weighs up a bill that would boost U.S. defence spending in 2017 to more than $500bn, while the presidential campaign has shown deep divisions on foreign policy.
When I wrote the film, it had just been reported that the Pentagon could not account for over $3tn that it had spent in Iraq. And I know that this summer, one of the major presidential candidates is saying that the US military is underfunded. This seems to be a wilful denial, or forgetting, of the enormous amount that the US spent in Iraq, and the drastic consequences on the Iraqi people.

The film is the true story of what happened, and I don’t think you need to be on any side of the political spectrum to appreciate how out of control things had to be for two kids in their early twenties to be charged with arming the Afghan military. The idea behind this initiative of the Pentagon, they said, was to give preference to small businesses and let the free market take care of it. What happened, and what the film suggests, was that less government oversight, especially concerning US defense spending, is not always the best solution for the American public.

It felt like a guilty pleasure to root for Efraim and David in War Dogs
That was a great challenge of the film from the beginning. It was two young guys, profiteers, breaking the rules, and lying, and for the story to work. We had to understand where they were coming from. And that’s why I went to Miami to meet with David Packouz. This wasn’t 50- or 60-year-old guys who had been doing this for decades. Instead, it was two guys in their twenties. One of them dropped out of high school in ninth grade, and the other went to a few semesters of community college and was a graduate of [a massage school].

Is there anything else you want to mention about the making of the film?
It seems to be more and more challenging to make these kinds of movies in the American studio system; films that are entertaining and interesting and important but which are not based on already-existing IP, like comic books, superhero stories, etc. So if we want to continue to make these kinds of films, like true-life stories and current events-based movies and the like, they will have to be made with international money from the UK, Europe, and abroad.

And many of the most talented people in Hollywood would welcome the opportunity to work on these types of projects if the funding is there. The international component is now so important, which was so unimportant 20 years go, and now we see that these are the types of films that are getting all the awards.