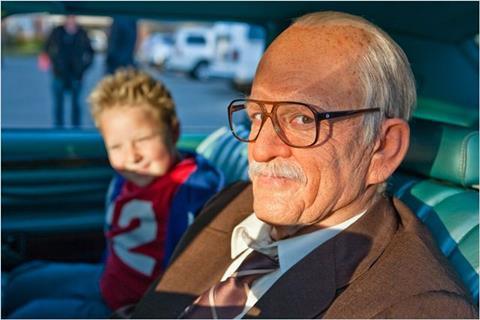 Given that the name ‘Jackass’ is plastered all over the rather unwieldy title it is pretty much a given that this film is going to feature pratfalls and profanities, but unlike other Jackass vehicles it actually flies close to being a more straight-forward comedy film as Johnny Knoxville takes on the guise of an 86 year-old sex mad pensioner and heads of on a wild and woolly road-trip.

Jackass Presents: Bad Grandpa is essentially a one-joke film – and as crude and rude as one would expect – but the rather sweet core of the film is the engaging relationship between Irving and Billy who grow to appreciate each others company as their trip goes on.

In truth though, director Jeff Tremaine (also a co-writer, co-producer and one of the Jackass originals) always shoots in a way that makes it more than clear that Jackass Presents: Bad Grandpa is using the old hidden camera trick, and while the story uses real folk (in a similar fashion to Borat or The Dictator) the audience is never in any doubt that the film is playing folk for laughs rather than trying to slot them into a piece of fiction…especially since some faces are blurred after then clearly didn’t give permission for images to be used.

The Jackass films always tend to attract strong audiences, and here the dream-team pairing of Knoxville and his scene-stealing co-star young Jackson Nicoll (who starred alongside Knoxville brilliantly in the appealing Fun Size, of which he was very much the best thing) shows what real on-screen chemistry can deliver. Opening numbers are likely to strong, with the film having a long life on home entertainment.

Knoxville ‘plays’ pensioner Irving Zisman (a character who first appeared on Jackass on television back in 2001), an old fella who sees the possibility of a new lease of life when his wife (the body of which is played gamely by Spike Jonze) passes away. But at the funeral his daughter arrives and leaves him his grandson Billy (Nicoll), who is supposed to be taken to his father while his drug addict mother spends time in jail.

And so the mis-matched pair head off on a road-trip to take Billy to see his father. Cue plenty of gloriously over-the-top staged comedy moments for real folks to be outraged in front of the hidden cameras. These range from Irving getting his penis stuck in a vending machine, interrupting male-strippers with his testicles dangling down to his knees and trying to ship Billy to his father in an oversized box, through to an admittedly funny sharting incident, shoplifting (not really funny) and the pair conniving to enter Billy in-drag into a girls’ beauty pageant.

Jackass Presents: Bad Grandpa is essentially a one-joke film – and as crude and rude as one would expect – but the rather sweet core of the film is the engaging relationship between Irving and Billy who grow to appreciate each others company as their trip goes on. Knoxville’s make-up is actually very good, and he is pretty convincing as a sex-starved old curmudgeon, but best of all is young Jackson Nicoll who is a comedy natural and helps balance out the films tendency to go over-the-top.

Naturally enough the closing credits feature behind-the-scenes footage of Knoxville in make-up, the looks of astonishment from those real folk involved in the pranks and some other moments of improv from Nicoll, who the crew clearly adores.