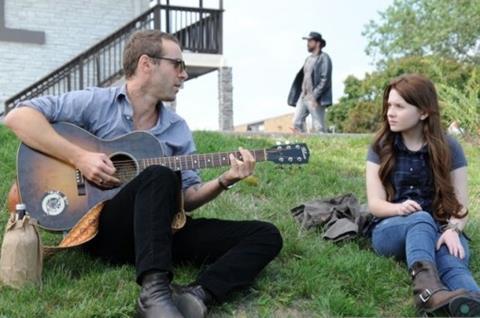 Janie Jones is a tuneful family flick that may well find itself up against a good deal of cynicism given its simplistic tale of a father and daughter getting to know each other, but it is modestly watchable and driven by impressive lead performances by Abigail Breslin and Alessandro Nivola.

Abigail Breslin is a charismatic screen presence, and quite splendid as the self-contained youngster.

In truth its home in most territories is likely to be cable, TV and DVD, but there is a darn solid cast here going about their work very well, only to be rather let down by writer/director David M Rosenthal’s rather naïve script and by-the-numbers plot development.

Thirteen year-old Janie Jones (Abigail Breslin) is dumped by her junkie mother into the disbelieving lap of singer Ethan Brand (Alessandro Nivola) at a concert, and when mum vanishes Ethan is forced to take Janie on the road with him.

He is a old school drunken excess-style singer, but as he struggles to deal with the folding of his band and being dumped by his record label he begins to spend more time with Janie. Naturally she is a burgeoning singer/songwriter/guitarist, and before you know it they are doing duos at small-scale gigs around the country.

Abigail (Little Miss Sunshine) Breslin is a charismatic screen presence, and quite splendid as the self-contained youngster doing her best to deal with her change in circumstances. The underrated and often poorly used Alessandro Nivola is impressive as the singer caught in a rock cliché of booze and self-despair, though best of all is Peter Stormare as his manager (cue big beard, cowboy hat and leather jacket) and virtually only friend.

There are no real surprises in Janie Jones, just a few embarrassingly cliché moments that get in the way…but the top-notch cast help cover up the modest nature of the plot and there are more than a few moments to enjoy.