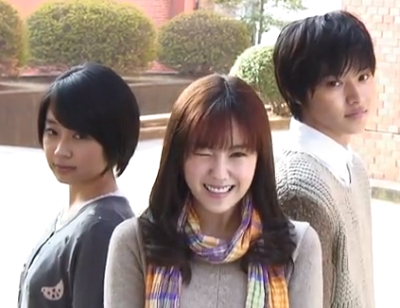 A frothy and fun-packed college comedy romance, Naoto Kumazawa’s Jinx!!! (yes, three exclamation marks!) is an engaging tale of star-crossed romance where those trusty plot devices of misunderstanding, shyness and friendship are used to good effect.

Best of all is Jiho’s love for the notion that couples should show their love by reenacting scenes from famous Hollywood romantic films.

Much is made of cross-cultural romantic references between South Korea and Japan, and while its youthful target audience is most likely from those territories the film has a whole lot of remake potential as a co-production between other countries (US and Japan, UK and France etc). The film had its world premiere at the Tokyo International Film Festival and opens in Japan on November 16.

The film actually opens in South Korea where young student Jiho (fresh and delightful K-pop star Hyomin, from group T-ARA) is waiting to meet her boyfriend for their 100-day date (celebrating romance every 100 days is a big deal in South Korea), but he dies in a motorcycle accident.

To try and get over her grief she heads to Japan as an overseas student (where much is made, naturally, about cultural misunderstandings). She quickly befriends the seemingly sad and rather clumsy Kaede (a charming Kurumi Shimizu) and starts to try and apply her Korean-style romance tactics to fostering Kaede’s would-be romance with the boy Yusake (Kento Yamazaki) she has loved from high school.

It is territory that has been covered many times before, but what gives this rather lengthy rom-com (it runs over two hours) its heart is the sheer force of personality of Hyomin in her film debut who is a real delight as Jiho, who puts her own sadness to one side and use her matchmaking prowess to try and help Kaede.

She tries to get Kaede to adopt the Korean romantic tactics of ‘milbang’ – essentially a series of rules on how to get a guy to fall in love with you – though naturally enough this leads to misunderstandings galore (as Kaede can’t quite seem to follow the rules) and also gradually draws out more about Jiho’s relationship with her late boyfriend.

The film has more than its fair share of charming moments – with more than a few side trips into melodramatic territory – with Liszt’s Liebestraum No. 3 acting as a romantic motif. Best of all is Jiho’s love for the notion that couples should show their love by reenacting scenes from famous Hollywood romantic films such as Love Actually and in particular Eternal Sunshine Of The Spotless Mind, where the scene of lying on the ice looking up at the stars plays a key role in Jinx!!!.