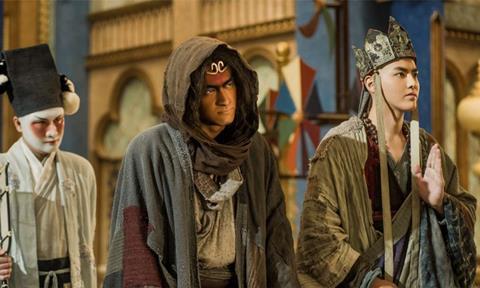 The Chinese box office started auspiciously on the first day of the New Year of the Rooster, which posted the biggest single-day gross ($116m on Saturday), up approximately 15% from the same period last year. When combined with Sunday, the first two days of the lunar new year amassed almost $200m in ticket sales, which definitely brought cheer to an industry reeling from the recent lacklustre performance.

Last year, Hong Kong hitmaker Stephen Chow’s The Mermaid made a record splash at the box office and went on to become China’s all-time box office champion. Chow returned this year as producer and writer to the new film, which is a sequel to his 2013 Chinese New Year hit Journey To The West: Conquering The Demons.

But he let The Taking Of Tiger Mountain’s Tsui Hark take over the director’s chair while rising actors Lin Gengxin and Kris Wu play the new monkey king and Monk Xuan Zang respectively. The CG-laden fantasy film is expected to cross the RMB1 billion ($145m) benchmark as early as tomorrow.

Coincidentally, both action comedies were partially set and filmed in India. Buddies In India, which also stars Wang himself, dropped to third place on its second day (Sunday). It was overtaken by Kung Fu Yoga, which maintained the highest audience attendance rate among the new releases on both Saturday and Sunday.

Unlike last year when only a trio of blockbusters dominated the box office, the audience were spoilt with more options this year. Following the success of his directorial debut The Continent, wunderkind novelist-turned-director Han Han’s second film Duckweed opened in fourth with $18.46m. Starring Deng Chao and Eddie Peng, the cross-generation story is about a son who travels back in time to experience his misunderstood father’s remarkable life and reconcile with him.

It was followed closely by Boonie Bears: Entangled Worlds on $14.31m for $17.23m. The fourth instalment, which features live action for the first time, is on its way to surpass its predecessors and set a new record for the local popular animation franchise.

A major change in tracking the Chinese box office was implemented in early January. The online booking fee, about 8-9% of the ticket price, is now included in the nationwide ticket sales system. Last year, audience who purchased their cinema tickets through online services grew exponentially to approximately 75-80% of overall ticketing.