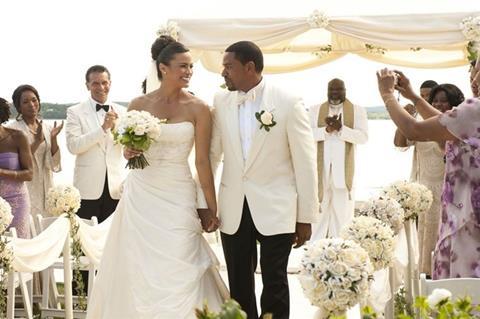 Jumping The Broom starts with a promising idea – looking at two culturally and economically different African-American families who converge on Martha’s Vineyard for the marriage of their children – but is soon undone by melodramatic plot points and relentless wedding-movie clichés. Despite a large, lively cast, director Salim Akil’s comedy-drama doesn’t have anything new to say about love, family, or race.

As Jumping The Broom takes a turn toward the dramatic more than halfway through, the movie’s innocuous good humour starts to seep away, resulting in one forced emotional showdown after another.

Opening on Mother’s Day weekend in the US on May 6, Jumping The Broom will be facing competition from the romantic comedy Something Borrowed, as well as from Tyler Perry’s Madea’s Big Happy Family, which opens two weeks earlier. Among the cast, Angela Bassett and Paula Patton will appeal to two generations of female audiences, but this TriStar offering may only prove to be a modest theatrical date-night performer.

After only a few months of dating, New York financial executive Jason (Laz Alonso) proposes to Sabrina (Patton), who will be moving to China because of her job as an attorney. Madly in love, they quickly arrange their wedding, even though the two families haven’t met. Unfortunately, in the days leading up to the ceremony it’s clear that Jason’s sassy, working-class mother Pam (Loretta Devine) doesn’t like Sabrina’s moneyed, refined family, led by elegant matriarch Claudine (Bassett). But the uncovering of one family’s secrets will put the entire weekend in jeopardy.

Jumping The Broom doesn’t deviate from the formula for most movies about a young couple getting married: A seemingly happy occasion is put at risk by family tension and unresolved resentments, usually culminating in shattering revelations. The film’s only real narrative twist is that, rather than the typical Hollywood version that stars white actors, this story is told from the African-American perspective.

But while there are so few films featuring a wealth of black characters, making Jumping The Broom refreshing on a superficial level, the sad truth is that TV director Akil and writers Elizabeth Hunter and Arlene Gibbs fail to tell an engaging tale, regardless of the colour of the characters’ skin. The film takes some stabs at examining how blackness in America is not one shared experience but, rather, as diverse and as fractured as any other community’s, but that doesn’t make up for a story heavy with sitcom-like situations and characters whose behaviour changes to accommodate plot necessities.

Also deeply bothersome is how bland the bride and groom are. Patton makes Sabrina spoiled and girlie without suggesting any depth underneath, and Alonso’s Jason isn’t much more than a stereotypically decent guy who never seems to have much chemistry with his wife-to-be. The supporting cast is equally problematic, with both Bassett’s uptight mom and Devine’s mouthy mom unlikable and one-note.

Other actors, like Mike Epps and Gary Dourdan, get the occasional laugh despite playing underdeveloped characters, but as Jumping The Broom takes a turn toward the dramatic more than halfway through, the movie’s innocuous good humour starts to seep away, resulting in one forced emotional showdown after another.