The directing duo talk about their second feature, which premiered in the Vanguard section at Toronto. 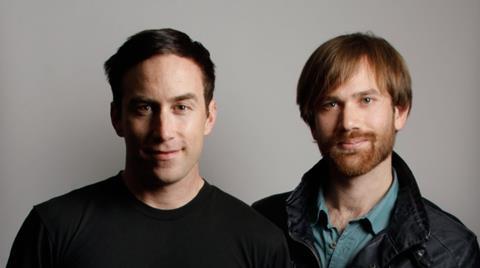 Spring centres on Evan (Lou Taylor Pucci) who, when his mother dies, decides to head to Italy where he meets Louise (Nadia Hilker), a beautiful young woman harbouring a dark secret.

It is the second feature from Justin Benson and Aaron Moorhead, who enjoyed critical acclaim with Resolution in 2012.

Spring screens again today having premiered on Friday in Vanguard and is handled worldwide by XYZ Films.

Having made a critically acclaimed debut feature, did you feel added pressure going into making Spring?

Aaron Moorhead: We definitely wanted to make sure we chose the right project next. For us, making Spring wasn’t about pressure of expectation and much more about being able to hold true to what made Resolution work for people. Making a movie that we could stand behind 100%.

Justin Benson: The only tiny bit of pressure was that when you go and make a micro-budget movie that does pretty well critically, there’s this weird thing where people aren’t entirely convinced you can make a movie with a real budget. We knew we could, but you still have a lot to prove.

Spring marks a step up scale-wise from Resolution, so did you encounter any particular problems?

Moorhead: On Resolution, we stayed at a camp that was right next to our location. This time it was very similar in that we were staying in the town we were shooting in and, in many ways, we tried to keep the same things that made Resolution work. Logistical issues were not so much from making it larger but it’s tough to transplant yourself into another country and make a film there.

Were there any lessons you took from making Resolution?

Benson: You learn something on everything you shoot, but also we prepare so much before we get to set and for us, there’s not much that can go wrong because our producer David Lawson is so amazing. We leave just enough open to chance to make something really special happen, but we prep so much that there aren’t many surprises.

Moorhead: We got two full solid weeks of rehearsal which was very important. One, it was the only way that we got to make the schedule work but also, and we did this on Resolution as well, you have to be able to track the character changes as you go, especially on something as character-centric as Spring.

The two leads have a really strong chemistry throughout. Was this something that developed from the rehearsal process?

Benson: We’d never made a romance before and everyone asked us about how the chemistry was. What we learnt is that they’re both really good actors, that’s what you need in a romance, more than the chemistry. You need two people that on day 30 make it look like they’ve just met on that day.

How do you two work together on set? Are there set roles given that Aaron shot the film and Justin wrote it?

Moorhead: That’s what the time in the rehearsal is for. We iron out all the kinks, such as character development, and once the camera’s on my shoulder, I’m right next to the actors but for the most part, Justin is driving the show and I’ll be shooting.

We’d have a little chat with each other after a shot but sometimes we won’t even need to do that, we just know what went wrong. It’s not something where either of us step into or out of a role, more like just when the camera’s on my shoulder which is 10% of the time on set.

Benson: We have such a long DIY background that sometimes I’ll jump in with make up effects or operating a tail if they need help. It’s all very hands on.

Moorhead: There’s definitely times when Justin has got his hands covered in blood or he’s wading out into the water, doing whatever it takes to make it happen.

Benson: Probably up to the 1980s/1990s, there was a position called director who literally all they did was direct. That probably doesn’t exist that much anymore.

Moorhead: Every director now rolls up their sleeves in some way. To really get a movie made the way you want it to, sometimes you’ve got to dig in.

Any idea what’s next for you two?

Benson: Our primary stuff that we have coming up, one of them is a movie about Aleister Crowley and it is very focused on the characters; there’s five main characters and several different relationships we get deep into. Then we have a TV show I’ve been working on that’s more of a coming-of-age story.

Benson: Then we have a UFO cult comedy that’s about two mens’ relationship with their spirituality, the ones from Resolution [played in the film by Benson and Moorhead].