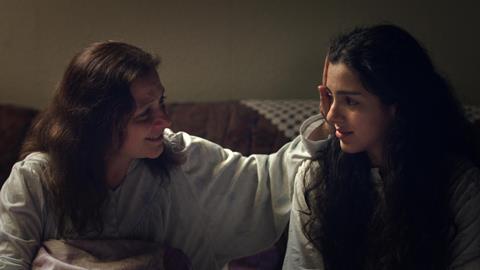 Kuma means ‘second wife’ in Turkish, and Umut Dag’s debut feature is indeed a claustrophobic domestic drama about a second wife, although, in the way of the Turks living in Austria who are depicted on screen, this film is quite deceptive and secretive in its approach. Posed entirely from a female perspective, Dag’s work is small-scale but cumulatively affective, even a little bit racy.

With a lot to shoulder, performances from the two leads are crucial and strong.

Exposure may well be limited, but this turns out to have enough heft to guarantee festival profile at the least. The events onscreen are greatly enhanced by a distinctive shooting style which presses in on the viewer in the subtlest of ways, until the limitations and tensions of the lives led onscreen become palpably real.

Kuma starts out wide, with a wedding in a Turkish village; amidst the clamour and the colour, several facts reveal themselves. Fatma (Koldas) is very ill; her son Hasan (Muslu) has just married a local girl called Ayse (Akkaya), which his sister Nurcan (Karabayir) resents; and they are all travelling back to Vienna where they will live together.

On their return, however, it becomes clear that all this is an elaborate ruse, and the young Ayse has been brought to Austria to become second wife to the ageing family patriarch, Mustafa (Erincin), with the full blessing - if not connivance - of his ailing first wife Fatma, who also has a son working in Germany, a married daughter in an abusive relationship, a teenage girl and a 10-year-old boy.

Once in Europe, the film quickly cuts from a wide shot of the mountains of Turkey to a closed-off world - the apartment, the local halal shop, the playground. This isn’t so much a film about integration - effectively, there is none, although Ayse does slowly learn to speak German - but the old ways and the new, the past and the future.

In this sealed-off Turkish community, appearances are everything and everybody guards their secrets, but the timid and well-meaning Ayse, brought in as a glorified housemaid, may yet effect a change.

Kuma isn’t evenly paced, and some of the early establishing sequences can tend towards the plodding. With a lot to shoulder, performances from the two leads are crucial and strong, although Koldas, as the somewhat saintly Fatma, only really makes her full mark in the final denouement - but it’s quite a mark.

Young Akkaya is certainly a face to remember, as is Muslu, as Hasan, her ‘husband’. Director Umut Dag, himself a Kurd, displays a marked sensitivity for the plight of his characters, turning in fundamentally what used to be called a ‘woman’s film’.  In his efforts, he is much assisted by intriguing camerawork from Carsten Thiele and a screenplay of some unexpected depth by Petra Ladinigg.

Screenplay Petra Ladinigg, from a story by Umut Dag