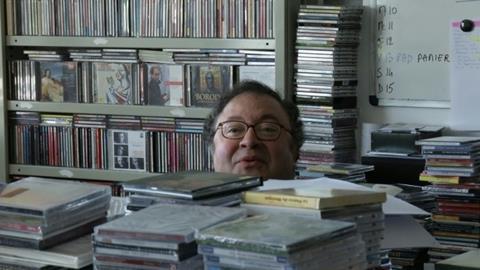 How do you film voices, music and the universe of sound? This affectionate, life-affirming documentary portrait of Radio France, the Gallic equivalent of BBC Radio, suggests one possible answer. You do it by focusing on the people who make or record the noises: their humour, passion, and quiet dedication to filling the silence with something worthwhile.

The director manages somehow to get crisp shots without ever seeming to lurk or pry: it feels as if certain cameras were simply placed and left running.

Nicolas Philbert specialises in making carefully edited and beautifully shot documentaries about the way people relate to each other and the world around them in certain defined spaces and organisations – whether it be the primary school of his award-winning To Be And To Have (2002), the museum of Louvre City (1990) or the zoo of Nenette (2010). La Maison de la Radio is no exception: far more universal than the Gallic material would suggest, it presents the denizens of the huge, ring-shaped Parisian Modernist building that houses France’s national broadcaster as genial adepts of a medium which seems (unlike its televisual cousin) to bring out the best in people.

France and Francophone territories will respond strongly to a subject that is embedded in their cultural DNA, but there’s no reason why this film should not turn on arthouse distributors in other countries too, given its feelgood vibe. And it’s not as relentlessly wordy as you might assume, with music, audio experiments, forest recordings and several effectively deployed passages of silent observation leavening the talk-radio and newsroom-conversation diet.

Ninety percent of the success of any good documentary is in the editing, and Philibert is a master of the art, sifting through what one assumes must have been months of footage to give La Maison de la Radio an engaging rhythm and structure. There’s a morning-to-night arc in the background, with the film kicking off from a 7am news broadcast and ending in the small hours of the next morning as the following day’s news stories are discussed. But it’s not a rigid frame: most of the time, Philibert is more concerned with emotional cadence of a film that alternates humour and passion, mild on-air flirtations and poignant illustrations of the power of the human voice to warn, charm, inform or entertain.

The director manages somehow to get crisp shots without ever seeming to lurk or pry: it feels as if certain cameras were simply placed and left running. Gradually, recurring characters are allowed to emerge – in particular, a news editor with a wicked sense of humour who turns the discovery of a fourth body in a French river into something Woody Allen might have scripted (she’s talking off-air, naturally); and the motherly but delightfully sharp-as-a-button producer of radio plays whose old friendship with her sound engineer comes through in glances, smiles and offhand comments. Occasionally we get outdoors, following a Tour de France commentator riding pillion on a motorbike or a sound recordist patiently setting up his gear in a forest clearing.

The decision not to identify speakers via captions is a good one: this is a film about a passionate, civilised, good-humoured community of people rather than single personalities. Sometimes the passion seems all-engulfing – as in a deliciously comic interview with a radio music archivist (one of the few conducted direct to camera) who struggles into view behind stacks of CDs.

Music consists both of diegetic performances recorded for the radio and jingles and theme tracks that provide a sometimes ironic commentary on the visuals. And this being French radio, even the shipping forecast comes across as an exercise in seduction.