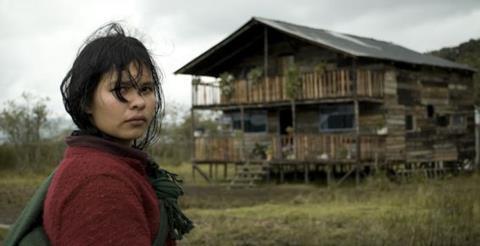 A slow-burn Andean fable of considerable evocative power, William Vega’s first feature is the latest in an impressive string of Colombian arthouse films that includes Los Viajes del Vento and El Vuelco del Cangrejo (on which Vega worked as assistant director). Set on the remote La Cocha lake high up in the mountains of south-western Chile, this is a film that overcomes the occasional mannered art-film cliché to weave a dreamlike elegy about a war-torn part of Colombia that is at the same time a nicely underplayed coming-of-age story.

The ending is perhaps a little too allusive and poetic for its own good.

Still, its charms are as much cerebral and emotional, and while it will certainly garner a handful of deals in territories with robust word cinema audiences, La Sirga is unlikely to match the interest generated by Las Acacias, one of last year’s Latin American discoveries in Cannes.

Sofia Oggioni Hatty’s carefully-framed and naturally-lit photography establishes a strong sense of place and atmosphere, working hand in hand with the production design of La Sirga – the leaky wooden lakeside inn where teenage Alicia (Arias) takes refuge with her reclusive uncle Don Oscar (Roble, a non-professional who is president of a Colombian NGO) from the violence that has killed both her parents.

The perpetrators are never named, but Colombians will recognise the area as a stronghold of the FARC guerrilla army, and perhaps read a more detailed symbolism than the rest of us into images of fog, distant thunder, bruised knees, abandoned mineworkings and a roof that fails to keep the rain out.

Gruff but not unkind, Oscar reluctantly allows his niece to stay for a while. She helps out her uncle’s taciturn and protective housekeeper Flora (Achicanoy), who mistrusts the new arrival, but will gradually warm to her.

The young boatman Mirichis (Guacas) who brought the fleeing Alicia to her uncle’s house becomes her timid courtier, and with his comings and goings acts as a reminder that there is a world beyond the remote, mist-bound wooden refuge where most of the action takes place. At a certain point Don Oscar’s absent son Fredy (Romero) returns from the city; he warns of imminent danger, and tells Alicia that the rumbling she can hear on the horizon isn’t thunder; it’s something else.

Alicia and Flora spend much time attempting to patch up holes in the wooden house, and cover the roof with tarpaulins against the rain. Inside the house, those cracks between the wall slats allow both Oscar and Fredy to spy on Alicia, who sleeps in the room between them – when she’s not sleepwalking, that is, into the lake, where she douses the candle she’s carrying before returning to bed.

Like a number of the film’s oneiric images (a mysterious floating clump of reeds that the locals call ‘el morro’, a crucified scarecrow used to frighten ducks away from a trout farm) this sounds as if it could be unbearably ponderous, but Vega keeps things real, most of the time, by keeping the focus firmly on Alicia (sensitively portrayed by Arias) and on a trauma and healing process that always feel credible.

The ending is perhaps a little too allusive and poetic for its own good, but is very much in line with this quiet film’s quiet yet convincing build to a kind of redemption, and maturity.