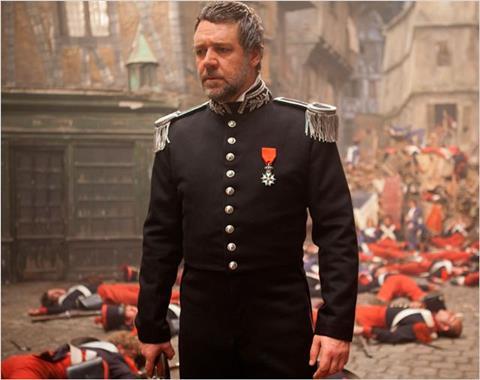 It seems everyone wants an encore. Universal’s Les Misérables has recorded a third straight week at number one in the UK after an excellent hold in its third weekend.

The ABBA musical did go on to record a whopping ten weekends of over £1m though, so Les Misérables has some way to go yet. Whether it catches it or not though, there’s little doubt that Hooper has delivered another UK hit, following the $72m (£45.7m) success of The King’s Speech.

It was a familiar picture at the top of the chart with Sony’s Django Unchained holding onto second spot for the second consecutive week.

This week’s highest new entry came in the form of Fox’s awards frontrunner Lincoln, which grossed a non-final $2.8m (£1.7m) to chart third.

While not noteworthy in the context of director Steven Spielberg’s other UK debuts, Lincoln’s debut did manage to overhaul the entire UK runs of recent biopics of key US figures: Clint Eastwood’s J. Edgar ($1.7m/£1.1m) and Oliver Stone’s W. ($1.9m/£1.2m).

It is worth noting though that both of these received smaller releases, opening on 259 (J. Edgar) and 235 (W.) sites compared to Lincoln’s 511.

Falling one place to fourth was Fox’s other awards contender Life of Pi which floated its way to an additional $1.8m (£1.1m) in its sixth weekend, a stunning drop of just 6%. Ang Lee’s adaptation of Yann Martel’s Man Booker Prize winning novel has now grossed a majestic $40.7m (£25.9m) in the UK.

In spite of not screening in advance for critics, Momentum’s comedy anthology Movie 43 recorded a sturdy debut in the UK with a $1.2m (£787,453) result from 275 sites. That’s ahead of its expected debut based on its US debut of $5m, which would have meant an expected £500k UK debut.

How well Sly’s Bullet to the Head performs when it opens this week will indicate whether The Last Stand’s performance is down to a lack of excitement in Arnie’s solo return to the big screen, or a recent general apathy towards action films in the UK especially in the wake of The Expendables 2’s soft performance last August.

This week sees saturation releases for eOne’s Bullet to the Head and Paramount’s Flight. Paramount’s Cirque du Soleil: World’s Away and Universal’s Hyde Park on Hudson receive wide releases, while Momentum’s Antiviral and Soda’s Bullhead are among the films receiving a limited release.