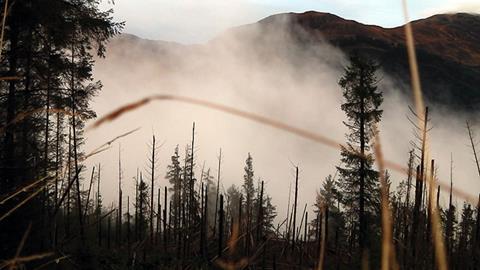 The latest essay from irrepressible cineaste Mark Cousins takes the form of an epistolary exchange with Iranian filmmaker Mania Akbari. What begins as a tentative exploration of her influences and methods eventually blossoms into a lofty, wide-ranging discussion of freedom, democracy, the solitude of exile and the urge to break the mental and physical boundaries that might restrict creative expression.

Life May Be may sound didactic and dry but Akbari’s scrapbook of memories and photos is charming and Cousins can be playful in both his provocations and self-awareness.

The result is a heady combination of intellectual discourse and seductive images that should readily secure further Festival exposure following its world premiere at the Edinburgh International Film Festival. It also provides some invaluable context and insight into Akbari’s career.

Cousins was asked to contribute to the extras in a dvd release of Akbari’s 2011 feature One. Two. One (Yek. Do. Yek). He wrote her a letter that he now reads over footage of forest scenes in Scotland. It provides a succinct reminder of Akbari’s place in Iranian cinema as a performer in Kiarostami’s Ten and the director of 20 Fingers and others. An effusive Cousins compares her to Scorsese, Bergman and a renaissance artist, also claiming ” you are to Iran what Virginia Woolf was to England.” She responds with personal reflections on her life in exile in London, what she left behind in Tehran and how difficult it is to escape the pain of the past.

Tired and emotional in Lithuania, Cousins responds by writing in praise of nakedness as a source of joy and liberation. ” I remember more when I’m naked,” he confides before stripping off. It is the start of a much more complex and personal dialogue in which Akbari asserts” ” in my country the body is not seen, it must be imagined”.

Differing levels of comfort with nakedness, differing attitudes to the unclothed human form have an immensely personal impact on Akbari. Cousins almost offers himself as a spiritual healer or guide as he encourages Akbari towards acts of liberation all the more poignant in the light of the breast cancer that she has addressed and confronted as a vital part of her work.

Life May Be may sound didactic and dry but Akbari’s scrapbook of memories and photos is charming and Cousins can be playful in both his provocations and self-awareness. He offers a collage of a hundred places he has visited recently and removes himself from the film as it builds towards a transcendent finale of beautiful images unfolding to Brahms Requiem.

The expectation of a film that might seek to emulate the long-takes and meditative style of Akbari’s own work is misplaced. In the end, Life May Me is intensely personal and revealing in the manner of something Derek Jarman might once have made. The fact that frequent Jarman collaborator Don Boyd produced seems entirely fitting.