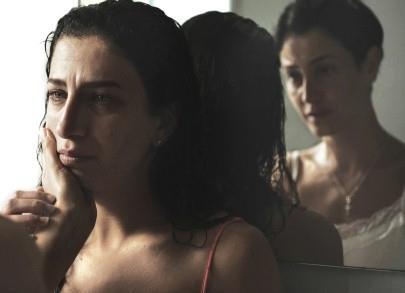 Twelve years after his debut feature Urban Feel played the Berlin competition, Jonathan Sagall’s follow-up is finally here. But if the first time around his disenchanted portrait of a self-destructive, decadent life style focused exclusively on Sagall’s own generation and environment, now with Lipstikka (Odem) he has added a provocative political angle that might raise protests and recriminations from more than one quarter.

A tightly written chamber piece, with remarkably sensitive performances by its female leads, this image of two Palestinian women whose adolescent traumas resound all through their London reunion, many years later, the film deserves to be appreciated for its purely dramatic qualities, but risks facing angry retorts from both Palestinian and Israeli nationalists who, on the one hand, will find Sagall’s choice of female non-conformist characters offensive to Palestinian traditions and, on the other hand, showing an Israeli soldier as a rapist, an insult to his fellow countrymen. Coming from an Israeli filmmaker, the controversial political issues may well affect the film’s future no less than its cinematic merits.

Sagall’s plot covers one morning and several flashbacks in the company of Lara (Clara Khoury) and Inam (Nataly Attiya), who had left their native town, Ramallah, 13 years before and have since been living in London. Both are seriously damaged characters, bearing not only the marks of the strict moral codes of the social environment they brought up in, but also the profound humiliation of the Israeli occupation that they had known all their lives.

Lara is Muslim, introverted, prefers members of her own sex and has a weakness for hard liquor, Inam is Christian, an extrovert who favours male company and indulges in it at the slightest excuse.

Religion has apparently never played much of a role for them, and in Ramallah they deemed themselves free and modern, with breaking the rules the natural thing to do, until they finally paid a terrible price for their attempted emancipation.

Years later, Lara is bound in a loveless marriage with an advertising executive, previously Inam’s boyfriend, and lives a comfortably depressing middleclass life. She is the mother of a seven year-old boy and finds consolation for every crisis in the bottle of vodka she always keeps on ice.

One morning Inam drops by uninvited, and their evidently uncomfortable relationship leads to a series of flashbacks, first to their early London days and then to the one shocking encounter with two Israeli soldiers in a Jerusalem cinema, culminating in a rape scene, presented twice, each through a different perspective.

At various stages of the film’s production it was suggested in the media that Sagall might be drawing an allusion comparing conditions on the West Bank and the concentration camps, but turned out to be completely unfounded, for there is nothing in the complete picture to justify the extreme reactions which delayed production for an inordinate length of time.

Khoury’s Lara, all respectability and hard lines, a safely established upper middleclass British housewife, manages to convey a tremendous amount of pain and anxiety hiding behind her carefully composed exterior. She is still Infatuated with Inam and never really forgave her for rejecting her advances and her misery is evident from the very first lines she has in the film.

Attiya’s Inam, coming up from nowhere to turn Lara’s life upside down, may pretend to be modern, irreverent, amoral and fiercely independent, but she turns out to be even more fragile and in pain than Lara, tormented by a past she has never overcome. Also remarkable are the performances of Rosenblatt and Weiner as the young Lara and Inam.

There is little doubt that Sagall’s hand in the British sequences is much firmer, in every respect, than in the Israeli ones but the main eventual objections against the film are most likely to focus on such matters as the permissive profile of the two adolescent girls or the reprehensible conduct of the two Israeli soldiers. Possibly negligible in any other circumstances, these arguments may prove far more acute given the specific background of this tale.