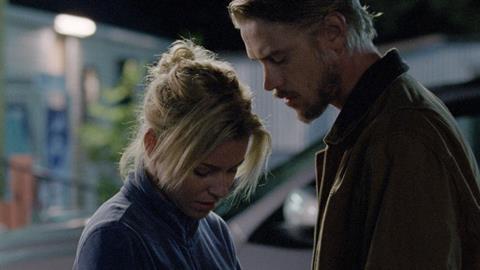 Little Accidents probes the wounds in a West Virginia mining town after the death of ten miners underground and the disappearance of a mine manager’s son.  Sara Colangelo’s sombre drama is a promising first feature.

Elizabeth Banks finds a complex poignancy (not evident in her earlier work) in motel trysts with Amos, whose testimony risks putting her husband in prison.

With a surprising turn from Elizabeth Banks as a grieving mother who mourns her lost son and her failing marriage, Little Accidents can expect more attention than most art house tales of woe. Subtle acting and sensitively rich cinematography also set Colangelo’s film apart from the indie pack.  The challenge of marketing so much sadness set in a dark palette will be offset by the strength of the film’s cast. Still, Little Accidents will be a hard sell theatrically.

An accident has killed the father of young Owen (Jacob Lolland), and disabled the only survivor, lean brooding Amos (Boyd Holbrook), who is pressured to testify against the mining company that controls a small town.

Paths cross the local class lines as Owen is bullied by the older TJ (Travis Tope), son of the mine manager, Bill (Josh Lucas), who may be liable for the accident. Banks plays Diana, Bill’s wife, a lonely pretty privileged housewife in a grey town.

A second fatal accident occurs when Owen strikes back in self-defense, and T.J. falls dead. Tension burns slowly as Owen keeps his secret and orders his younger brother with Down Syndrome to keep silent.

Little Accidents is sure to be compared to In The Bedroom, Todd Field’s small town family saga of loss and burning resentment.  There are also echoes of the Dardenne brothers in the film’s close scrutiny of a place where industry is vanishing, seen through the eyes of young Owen, who has the troubled face and the sad urgency (and the bike) of a Dardenne protagonist.

Through the lens of cinematographer Rachel Morrison, the town of Little Accidents has the quiet despair that you can find in the still photographs of William Eggleston.  Close-ups portray characters against the backdrop of the settings that define their lives. Morrison shoots interiors as if they were dark enclosures, trapping characters in above-ground equivalents of the mines below.

Colangelo’s script is best when it frames individual grieving, and less persuasive when it puts improbable characters together as grievances fester.  Like still photographs, her characters hover over a context that begs for more definition in her script.

Yet the acting in Little Accidents takes you right to the pain of its stories, which is anything but little. Elizabeth Banks finds a complex poignancy (not evident in her earlier work) in motel trysts with Amos, whose testimony risks putting her husband in prison. Holbrook as Amos plays his part on one monosyllabic note, but he can out-deadpan Ryan Gosling.  If the film is released in the UK, his Appalachian murmur will require subtitles.

Jacob Lofland (Mud) conveys a powerful inner strength as Owen, as fears that the secret he holds will be exposed. Playing his mother, Kendra, Chloe Sevigny is angry as the woman left behind when her husband dies from what looks like negligence. Her role is inexplicably abbreviated in a film that could have used more of her.