Love Is The Perfect Crime 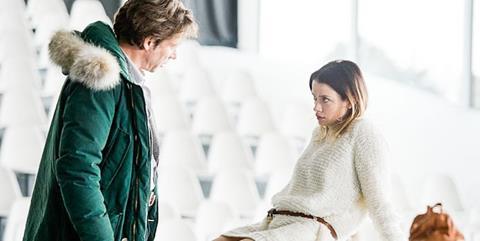 Snow and mostly mirrors surround the Larrieu Brothers’ chilly murder mystery Love Is The Perfect Crime (L’amour est un crime parfait). Set in the University of Lausanne, around the shores of Lake Geneva, and an Alpine mountain lodge, it’s a twisty genre adaptation of the crime novel Incidences by Philippe Djian (also the author of Andre Techine’s Unforgettable).

Almaric’s character becomes increasingly derailed, and although the film’s framework also begins to collapse under the weight, it’s an enjoyable journey nonetheless.

Starring Mathieu Almaric and the Polisse actresses/director Maiwenn and Karin Viard, Love is a film which is always on the move, and enjoyably so. It boasts excellent technical credits and some fine acting, nods and winks to Hitchcock, and more than its fair share of dark gyrations and shady femme fatales. That its plot melts into a warm puddle by the end doesn’t fatally harm Love Is The Perfect Crime, which seems destined for a warm welcome in France and a seat in the art-house.  Love isn’t the perfect film, but it is a snakey pleasure.

Love is a change of mood from the authors of To Paint  Or Make Love, Voyage aux Pyrenees, and Les Derniers jours du monde (This Is The End). The Larrieu Brothers’ regular lead actor Almaric, as a lusty literature professor, gives a nervy performance that perfectly compliments the twisty, icy, roads of his domestic life and the womb-like allure of his offices and their endless line of sexually available students.

Guillame Deffontaines’ crispy camerawork and a slightly edgy synth soundtrack by Caravaggio help amplify the Hitchcockian overtones as Barbara, a student we last see in the professor’s bed, goes missing. Slowly, the film’s eccentricities pile up – Maiwenn as the girl’s step mother, Viard as his possessive, occasionally vampy sister, Sara Forestier as a lusty student who just happens to be the daughter of Switzerland’s Tony Soprano.

Unsurprisingly, Almaric’s character becomes increasingly derailed, and although the film’s framework also begins to collapse under the weight, it’s an enjoyable journey nonetheless.

Love Is The Perfect Crime starts out with a pre-credit sequence, a night-time journey along twisted Alpine roads to Amalric’s rustic chalet in the snow, which he shares with his sister Marianne (Viard). A wolf crosses the road. He’s driving a young girl who says, “I’m in your lair at last”.

Cut to the glassy university, with its “work bubbles” where professor of literature and chain-smoker Mark (Amalric) is being quizzed about Barbara’s disappearance. Her stepmother Anna (Maiwenn) arrives on the scene. Soon it becomes clear that Mark’s head of department Richard (Podalydes) isn’t just a professional rival – he has set his sights on the college librarian, Mark’s too-close-for-comfort sister Marianne. Add a crazy student in the mix, and you hardly need the clips from Bunuel’s La’Age D’Or that Mark shows his students to up the discomfort.

Contrasts are clear between Mark’s glassy work environment, where paranoid rivals obsess over each other in an academic fishbowl surrounded by suggestive students, to the Alpine cabin in which he and his sister have sequestered themselves. He starts to have headaches, explosive nosebleeds, flashes, memory lapses, while his attraction to Anna becomes all the more pervasive – and destructive.