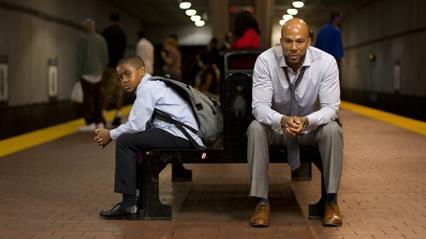 A well-meaning but muddled drama that melds the coming-of-age tale with elements of the crime film, LUV boasts a strong performance from rapper-actor Common that can’t make up for first-time feature director Sheldon Candis’s shaky, somewhat derivative execution.

Once the film segues into something of a crime thriller LUV loses its believability and instead becomes a facsimile of similar works of fiction.

Screening in Sundance’s US Dramatic Competition, LUV isn’t enough of a straight crime drama to automatically attract fans of that particular genre, but indie supporters and African-American audiences may find much that interests them here. An impressive supporting cast that includes Danny Glover and Dennis Haysbert could help as well, but the concern is that without strong reviews this might be a mid-range offering that never quite finds its niche theatrically.

Set in urban Baltimore, LUV considers the plight of 11-year-old Woody (Michael Rainey Jr.), who lives with his grandmother and pines for his absent mother, who is living in North Carolina for reasons that aren’t initially clear. But Woody is excited to be reunited with his Uncle Vincent (Common), who recently got out of prison after eight years.

Fatherless, Woody looks to Vincent as his only male role model, and so he eagerly agrees to accompany his uncle while he goes to take care of some business in town. Unfortunately, Vincent’s plans to go legit – which involve getting a loan from the bank for a property he wants to turn into a restaurant – quickly morph into something more treacherous when he reluctantly has to do a favour for a mobster (Glover) from his past to get the money he needs.

LUV explores how violence – like other aspects of life – can be learned behaviours that are passed down from generation to generation. At its best, the film nonchalantly but incisively illustrates how, within the movie’s African-American community, gun violence and crime are tied into the fabric of everyday reality when there are few economic opportunities and might too often makes right.

Unfortunately, Woody’s journey with Vincent back into his criminal ways ends up working mostly as a sociocultural portrait because LUV’s actual storytelling is far less confident. While Common capably dramatizes Vincent’s internal struggle between embracing his old ways and starting fresh, LUV mostly covers the same plot points that will be familiar from dozens of previous crime films and TV shows, including tough-guy showdowns with unstable underworld types and overly melodramatic Mexican standoffs.

Give Candis credit for demonstrating a feel for the rhythms of African-American life, but once the film segues into something of a crime thriller – with Common’s mob errand growing progressively more harrowing – LUV loses its believability and instead becomes a facsimile of similar works of fiction.

In only his second film role, Rainey Jr. impressively exudes the laconic, streetwise savvy that’s appropriate for a character like Woody. But because the movie focuses more on Vincent’s personal crossroads, Woody’s introduction into the criminal world is never quite as frightening or heartbreaking as it should be – he’s too much of an observer in LUV for his surprising transformation to resonate. As for old pros like Danny Glover and Charles S. Dutton (as a former associate of Vincent’s), they always elevate whatever they’re in, but it seems a shame that the film’s supporting cast as a whole has to fit into generic crime-movie types.