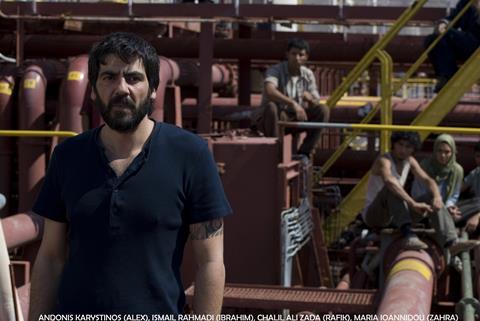 All at sea without a lifeboat, Constantine Giannaris’s English-language maritime refugee drama springs leaks in just about every department, from limp performances by a Greek cast clearly uncomfortable with their cheesy, rote-learned English lines, to a script that lacks dramatic tension and never believes in the trauma-laden backstories it so desperately keeps inventing to give the characters some depth.

Few of the characters are more than hasty sketches.

The film’s one saving grace is its conventional but handsome widescreen photography, which uses the tanker setting to good visual effect. But this is not enough to save the ship. Man at Sea’s baffling selection in the Berlinale’s Panorama sidebar should not be read as a gauge of its sales potential, which outside of cut-rate TV sales must be fairly non-existent. It’s difficult to see it raising much interest even at home in Greece, unless the tanker’s slow descent into chaos somehow strikes a metaphoric chord in the crisis-stricken country.

The confusingly structured plot centres on Alex (Karystinos), a Greek ship’s captain who we can tell at first glance has a ‘Ghost In His Past’. When his tanker intercepts a boatload of refugees somewhere in the Mediterranean, Alex takes them on board, against the orders of a shipping company colleague, Mati, who is only ever heard as a voice on the ship’s radio. His crew also disapproves; only Alex’s estranged wife Kate, a doctor, welcomes the refugees and tends to one in particular, Samir (Tsourakis), whose mother died when they were at sea.

The setbacks come with grinding predictability, and meet with little resistance from Alex, who seems content to simply press on when Spain refuses to take the refugees in and when a convenient storm prevents him sending them ashore in the Canary Islands. An appointment with a shipping company fixer in Sierra Leone who is supposedly taking the refugees off Alex’s hands on behalf of Doctors Without Frontiers goes pear-shaped and turns into a clichéd brush with the Dark Heart of Africa.

Meanwhile as Alex and Kate are agonising about the death of a son years before - one of several backstory trauma tales that are thrown on like petrol to rekindle some interest in the story - the refugees are revolting, and the ship’s crew is starting to turn nasty. When conflicts do erupt, they seem staged, and soon fizzle out. As the tanker steams south towards the Cape, colours get darker, lighting becomes more chiaroscuro and the story takes on a horror tinge - throwing its credibility overboard in the process.

Few of the characters are more than hasty sketches, and although Karystinos does his best to give Alex some brooding depth, he struggles to overcome the fact that the audience have little clue what motivates him - despite all the somberly poetic captain’s-log voiceovers that the script resorts to when it can’t think of a proper dramatic way of telling the story. Apart from a few exchanges in Greek or Farsi the crew and refugees converse in English, but the lines sound stilted and the pretty cast look more like global models from a Benetton advert than genuine refugees.