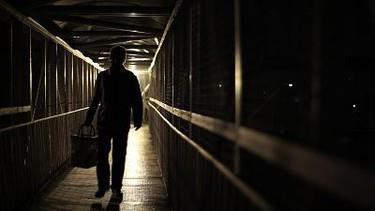 The latest film by writer-director Mohammad Rasoulof is indisputably a brave and important undertaking, and something extremely rare - an Iranian political thriller. That’s why it’s important to make allowances for the formal shortcomings of an unwieldy piece that awkwardly shoehorns its political message into a narrative package à la Costa-Gavras.

While the film’s political content is incendiary stuff, it loses its charge somewhat in the communication.

However, the message is so important - and Rasoulof is conveying it under such difficult conditions - that the film rather transcends normal considerations. Whatever its prospects on the export circuit, Manuscripts Don’t Burn (Dast-Neveshtehaa Nemisoosand)

demands to be seen as widely as possible, and will a key exhibit at human rights and other festivals. Normally, one might say that the film could benefit from trimming - if that comment didn’t smack somewhat of censorship.

Indeed, the film’s subject is censorship and the forcible repression of artists’ and other dissenting voices - a topic Rasoulof knows much about, since in 2010 he and fellow director Jafar Panahi were banned by the Iranian government from making films and given jail sentences (Rasoulof nevertheless has managed to attend Cannes with his film).

Like Panahi, Rasoulof has inventively managed to circumvent the ban. Shot secretly, Manuscripts Don’t Burn is a fictionalised exposé of the Iranian government’s silencing of artists and intellectuals - its methods, the film suggests, even extending to murder.

The title is a quote from Russian writer Mikhail Bulgakov, implicitly making a parallel between censorship in Iran and in Stalin’s Russia. Based, as opening titles announce, on a true events, the story begins with an individual - named Khosrow in the press notes, but seemingly never on screen - finishing a job that involves the bloody death of parties unknown. Rasoulof humanises Khosrow by showing us his private life: money problems, and a young son who needs hospital treatment.

We also meet a disabled writer, Fourouzadeh, who’s upset at having his latest work banned, and who tells his friend, fellow scribe Kian, that he intends to publish it privately. Another key character is a prominent newspaper editor who also has the job of intimidating and silencing writers who question the regime.

Much of the film shows Khosrow and his associate Morteza, who drive from Tehran to a Northern town with a man bound and gagged in the boot of their car. Their mission is to kill him and make it look like suicide; it’s only later that we discover he is none other than Kian. The intrigue revolves around a manuscript written by a third writer, Kasra, revealing a failed government plan to get twenty-one dissident artists killed in a coach crash - with Khosrow as the driver.

The drama culminates in a disturbing and graphic sequence in which Khosrow kills Fourouzadeh. It’s also implied that government goons like Morteza are prepared to kill children if they are inconvenient witnesses. No less provocatively, Rasoulof shows Khosrow excusing himself his crimes under cover of religious piety; while he worries that his son has become ill as divine punishment for his crimes, Khosrow protests that everything he’s done, he’s done for God.

While the film’s political content is incendiary stuff, it loses its charge somewhat in the communication. The confusing narrative builds up too slowly, front-loading the film with laborious exposition and prolix discussions between the writers about the pros and cons of publishing their work published online, and about the perceived lack of political commitment in Iranian youth (the three writer characters are all elderly). There’s also an off-puttingly two-dimensional performance by the actor playing the editor, so icy and smooth he could almost be a Bond villain.

Still, artistic shortcomings take second place to the fact that making this film is itself an audacious and dangerous act - which is why, as end titles point out, cast and crew members remain anonymous in the interests of their safety.