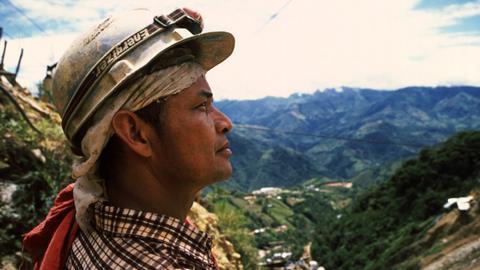 The striking and vivid story of a Columbia mountain town and the $20billion in gold that lies beneath it, filmmaker and photojournalist Mark Grieco’s documentary offers a fascinating glimpse into life in a tough and resilient community where they are struggling to protect their way of life.

Marmato impressively presents a beautifully shot portrait of resistance as this stoical town does its best to fight against the onslaught of change.

Marmato is a striking mountain town where families pray for the safety of their menfolk as they head off to work in the old-fashioned mines. Shafts have been sunk into the mountain over the years, with the miners still using shovels and sulphur lamps (as well as liberal amounts of dynamite) to unearth the rich seams of gold.

Their mountains contains one of the last great supplies of gold. But, as one miner states: “Our only sin is to live above one of the biggest gold reserves in the world.”

Shot over six years, the film initially follows the lives of the miners as they go about their work. But in 2006 the Colombian government invites foreign investment into the region to try and stimulate economic growth and sets in motion a modern day gold rush with plans to level the stunning mountain, shift the town and embark on a large scale open cast mining.

The film astutely captures the locals as they try and find ways to retains the only life they have known. One family man turns to mining illegally (the government bans the shipments of dynamite to try and curb the old mining ways); a mine owner looks for the right price to sell, and an activist leads a series of protests.

Marmato impressively presents a beautifully shot (the views from the houses over the surrounding valleys are stunning) portrait of resistance as this stoical town does its best to fight against the onslaught of change.