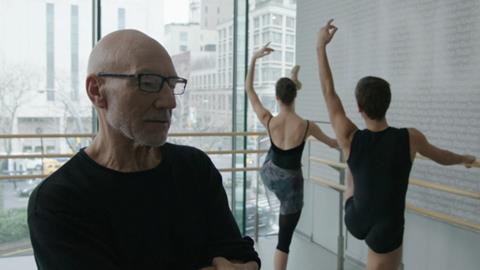 Playwright-turned-filmmaker Stephen Belber does a great job in opening out his play Match into an enthralling film. Its three-hander structure naturally limits just how much it can be expanded but it provides a great platform for Patrick Stewart, who enthusiastically plays a Julliard dance teacher who finds his past comes back to haunt him when he is approached by a man who may well be his son.

It allows Belber to ruminate on life and love, regret and loss and also offers Patrick Stewart a great platform to play a flamboyant yet insecure man who is forced to reexamine a self-centred life.

Playing alongside the equally impressive Matthew Lillard and Carla Gugino, Stewart is in great form as the film weaves in history and morality with a good deal of left-field humour and makes great use of its New York locations.

Stewart pays Tobi Powell, a former dancer who has settled down to teach after a long globe-spanning career as a dancer. He is excited and rather nervous when grad student Lisa (Gugino) and her husband, Mike (Lillard), come to talk him at a diner (he worries about the manager providing a ‘party mix’ of snacks for the interview) about his early days.

But it becomes apparent that rather serious Mike is no real dance fan and has other movies for delving into Tobi’s love life when he was younger and his hedonistic activities in the swinging sixties in particular and when this gay man may have had sex with one woman in particular.

Despite the fact the Tobi gets annoyed about this line of questioning, blunt cop Mike is determined to get him to admit that he had sex with his mother and could well be his real father. He forcibly takes a DNA sample and stomps off to get it tested, leaving Lisa to try and apologise for what has happened and also explains she feels about Mike’s  obsession about his mother being abandoned.

These scenes are remarkably tender, and while it is hard to accept Tobi’s eventual acceptance about having them in his home under false pretense the scenes of Stewart and Gugino sharing about the lack of warmth in their lives is gently moving. Things take another emotional spin when Mike returns.

The point of the film is not so much whether Tobi is Mike’s father at all, but rather it allows Belber to ruminate on life and love, regret and loss and also offers Patrick Stewart a great platform to play a flamboyant yet insecure man who is forced to reexamine a self-centred life.