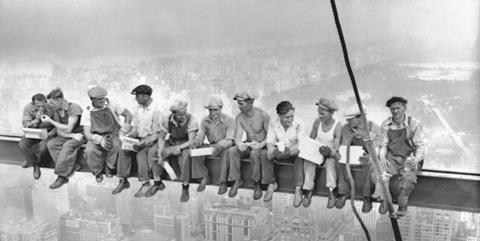 One of the iconic photographs of the 20th century, Lunch Atop A Skyscraper, which captured the astonishing shot of 11 steelworkers in New York in 1932 sat taking their lunch while perched on a steel girder 850 feet above the ground, is impressively analysed in Seán Ó Cualáin’s fascinating documentary Men At Lunch.

Men At Lunch is a fascinating film and Ó Cualáin’s photographic detective work is both evocative and eloquently effective.

At that period in time the US was in the midst of the great depression, with immigrant workers descending on New York desperate for work, with the sturdy steelworkers willing to face all sorts of risks as they worked at great heights.

The legendary photograph captured steelworkers working on the GE Building, but published anonymously in the New York Herald Tribune on October 2, 1932, it failed to identify any of the men, let alone delve into their backstory.

Working his way through the immense photography archives at Rockefeller Centre and the Iron Mountain storage facility in Pennsylvania, Ó Cualáin attempts to tell the story of the photograph. And having unearthed the original glass-plate negative he reconstructed the photograph as a digital projection and used actors to recreate the workers’ poses so that the image to be studied from every possible perspective.

It is a fascinating journey – and handily for Ó Cualáin there is even a Irish angle to one of the stories – and while the film never reveals every aspect of the background to the photograph (and actually never really attempts to do so) it does provide a telling snapshot of a period in time and brings the trials, tribulations and sheer determination of the immigrant workers into stark perspective.

Men At Lunch is a fascinating film – and one that should feature at other festivals as well as proving attractive to television buyers – and Ó Cualáin’s photographic detective work is both evocative and eloquently effective.