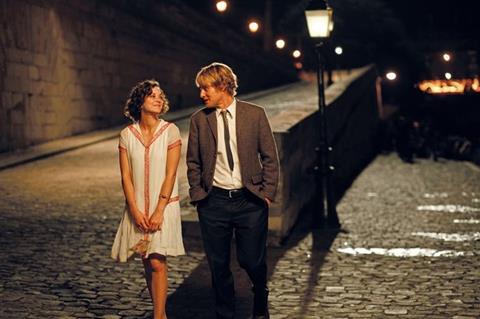 Woody Allen’s lush and charming Midnight It Paris is an amusing and elegantly constructed love letter to Paris, rich on romance, humour and culture and driven by a nicely pitched performance by Owen Wilson as a would-be writer in-love with the city and its cultural past.

To a certain degree the film is the perfect Woody Allen rom-com concoction.

Its breezy and accessible structure, easy laughs and strong mainstream cast should help the film secure strong box office and generally positive reviews, and it looks likely it will be one of Woody Allen’s stronger performers. On a certain level it is a familiar Allen concoction of smart urbane laughs that lacks real intellectual depth, but Midnight In Paris delivers easy warmth and is a sweetly engaging Cannes opening night film.

Woody Allen has gone on record stating that he considers Paris as the equal to New York as the greatest city of the world (despite flirting with London and Barcelona in recent films) and certainly the opening scenes of Midnight In Paris are reminiscent to Allen’s 1978 classic Manhattan with its lush montage of shots of Paris in sunshine and rain set against a jazz classic.

Hollywood screenwriter Gil (Wilson) is on holiday in Paris with his fiancée Inez (Rachel McAdams) and her wealthy parents (Kurt Fuller and Mimi Kennedy), who are grudgingly in the city for her father to seal a business deal. They make no bones in their dismissal of Gil, who is fretting about the novel he is writing and absorbed with Paris’s cultural past.

Inez is less enthused about Paris - especially when Gil talks about giving up his screenwriting and moving there to finish his novel - but is cheered up when they bump into they bump into intellectual Paul (Michael Sheen) and his wife Carol (Nina Arianda), much to Gil’s annoyance.

Gil sees the pompous Paul as an annoying stuffed-shirt, and starts doing all he can to avoid spending time with them all. After an evening’s wine-tasting (Paul is also apparently an expert on French wine) Gil leaves them when they all go dancing and wanders slightly drunkenly around Paris.

As the clock strikes midnight a vintage car drives up to Gil and the drunken occupants pull him into the vehicle and take him off to party. To his bemusement Gil finds that he has gently drawn back in time and finds himself chatting to Scott and Zelda Fitzgerald (Tom Hiddleston and Alison Pill), listening to Cole Porter play piano and chatting to Ernest Hemingway (Corey Stoll).

From then on Gil uses the excuse of late night Parisian walks to re-enter this wonderful world populated with his favourite literary and cultural figures. Gertrude Stein (Kathy Bates) offers to read his manuscript, and while at her flat he meets the beautiful Adriana (Marion Cotillard), who has been the lover and muse to a series of artists (including Picasso, Modigliani and Braque).

In another amusingly charming interlude - after he and Adriana have wondered the city - he has a drink with Salvador Dali (Adrien Brody in a cameo), filmmaker Luis Bunuel and photographer Man Ray.

Gil finally plucks up courage to declare his love to Adriana though to his - and her - surprise they are approached by a horse-drawn landau and find themselves in Paris of the Belle Epoque (Adriana’s dream cultural era) and mingling with Toulouse-Lautrec, Gauguin and Degas.

Woody Allen’s film is very much about romantic attachments to different era - and how the past always seems much more exciting than the moment one lives in - which allows for plenty of amusing and smartly written scenes. It does also get a little wearing as Gil bumps into one famous figure after another.

But Woody Allen has a smart wit, and keeps things nicely paced and amusing and in Owen Wilson has found someone at ease with his flowing dialogue, even delivering the usual Allen lines about fear of death with genial ease.

Marion Cotillard looks terrific in her 1920s dresses, though is actually given little to do apart from act the romantic muse to the mildly neurotic Gil, while the ever-excellent Rachel McAdams (who starred alongside Wilson in The Wedding Crashers) gets some of the best lines and adds a contemporary sex-appeal.

Michael Sheen nails the intellectual pedant role with ease - he is an easy mixture of smarm and charm - and has a nice scene where he argues with a tour guide (France’s first lady Carla Bruni) at the Rodin Museum about Rodin’s wife, while also impressive (and building his reputation nicely) is Tom Hiddleston as Scott Fitzgerald.

To a certain degree the film is the perfect Woody Allen rom-com concoction (and in truth would have worked just as easily as a concept in New York) while the strong cast and lovely locations could well help it appeal to audiences who might not be Woody regulars.