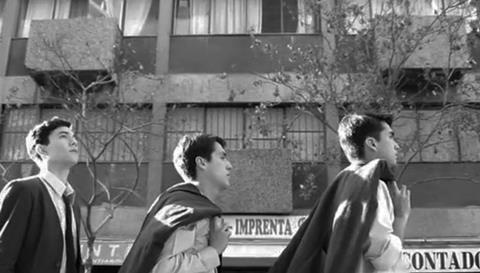 A tuneful and very watchable black-and-white drama about young Chilean students setting up a rock’n’roll band in the small town of San Miguel in Chile set against the backdrop of Pinochet’s military dictatorship, Matias Cruz’s directorial debut should appeal to festival programmers as well as having the moves to click niche Spanish-speaking territories.

Based on a true story, Miguel San Miguel, which screened at the Miami International Film Festival, is set in 1979 and follows three teenage school friends who are bonded together through their love of music. Listening to The Beatles, David Bowie and other bands from the UK and the US they are inspired to set up their own band.

The trouble is that they are short on instruments and have no money to buy any. They create their own variation on an electric guitar using an old acoustic guitar and fitting their own pick-ups and use an old briefcase as a drum set. They also contrive to build their own recording equipment using cassette recorders.

The boys form a band which they at first call “Los Vinchukas” and compose songs that respond to the increasingly repressive and violent environment of the times. After they are picked up by police for loitering in the streets they change their name to “Los Prisioneros,” and after listening to The Clash – and especially their song I Fought The Law – find just how they want their band to be.